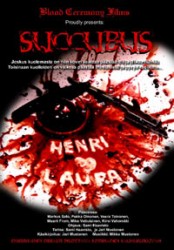 Henri has been strucken by death of young wife Laura; his desperation changes in obsession when he begins dreaming her woman every night, still wearing her wedding dress. Henri is sure that woman’s presence is more than a simple impalpable spirit, figment of his imagination, and he isn’t able to focus on work and to face everyday with serenity.
After talking with a psychiatrist, Henri figures out to be confused with Laura’s cause of death. Perturbed from the hole in his memory he turns to a medium, trying to contact his wife, and right during an ancestral rite he evokes a demon with female appearance (“succubus”) who reveals the disturbing truth in an orgiastic union.

Finnish film directed on 2006 and produced by independent Blood Ceremony Films, mainly realized by non-professional actors, who want to give vent to their passion for horror movies. I need to underline that in spite of basis amateur taste, Succubus qualitatively (photograph, editing, direction) is even near to tv production, though low-budgeting. Faults are present and visible, but interesting ideas too, leaving foretell a great future for Blood Ceremony. The holes to be covered are, in fact, manageable widely from Haavisto and his troupe.

I understand that production time is limited, but a major attention to storyline could ratify a better return. Main troubles of Succubus are the first forty minutes when nothing happens. Director would let us entering into main-character’s psychology, but there aren’t enough incidental close-up of the desperate man. Flashbacks would have certainly helped, besides a voice-over.

Handling a so suggestive natural landscape, moreover, it would be useful using outdoor tracking shot as to recreate a parallax between frost of the earth and Henri’s one. Really suggestive images of the demon over the pile of skulls with a pale red flaming in the sky, behind her shoulders, and the anaemic slaves on her feet. Also very good the orgy around Laura’s coffin, with an editing link absurd and dream-state situations in a mix of horror and death. Waiting for a work even more mature, compliment to Blood Ceremony Films for the bravery to face the “market” armed with underground movies.