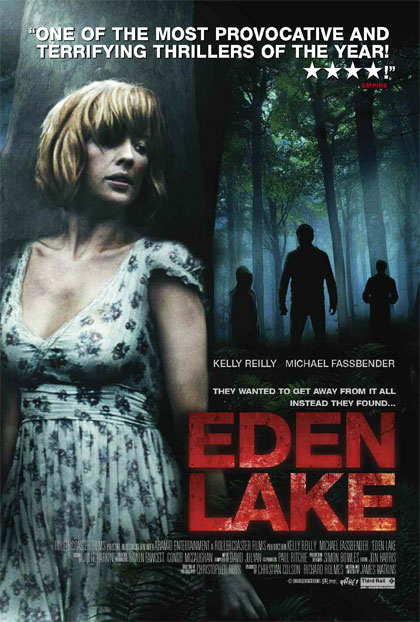 Jenny and Steve are two adults decided to spend a weekend in a place in England with an evocative name: Eden Lake. The lake and nature are the perfect setting for the romantic trip the couple is going to spend, and a perfect place for Steve’s proposal. But the arrival of a boys gang breaks the magic, annoying the couple with their shouting voices and loud radio. The situation gets dramatically worse when the group makes Steve’s car disappear, forcing the couple to chase after the thieves and face them. The consequences of this offense will be totally unexpected, turning the eden in a neverending nightmare.

Viewed as national preview at the Ravenna Nightmare Film Fest the movie of James Watkins turned out to be, imho, the surprise of the festival. Let’s say clearly that in “Eden Lake” there is no original idea able to destructure and reconfigure horror genre, no impressive directing/style solutions able to kidnap the attention of the most squeamish and hard to please, but there’s a fundamental element wrapping it with a peculiar coating: the developing of an extremely up-to-date social theme. The juvenile violence here shown is a burning issue in the UK (where the movie is set) and not only. To fix on the film such a pressing subject could’ve easily been troubling, or at least difficult to tell.

The use of the survival horror as a genre is nothing more then a mere shell hiding a much wider and colorful prism, being used to drag the entire structure which dips its hands in an explicit and direct bloodbath, dealt like a punch in the stomach of the audience.

In this view some scripting fails or style falls (Steve resolving to go to the boys’ parents house and badly falling from the window or the prong “accidentally” pricklig Jenny’s foot) can be forgiven, swiftly forgotten thanks to the sequence of dramatic events which unfolds.

Other everyday elements appear, such as the use of the mobile for the voyeuristic pleasure to film one’s madness and spread it into the box of endless possibilities called internet. Even the very first scenes of “Eden Lake” are not to be undervalued, showing Jenny as a teacher in the day nursery, surrounded by those quiet kids’ faces which in a disconnected vibration of the cathode tube turn into the brash and fierce faces of the nowadays young. Surely an allusion which makes one think to the decline which is grabbing the youngest, underlined by a glacial ending, the only one that could be realistically conceived.

Excellent also the cast with Kelly Reilly intepreting Jenny, haunted and suffering, with her blue eyes misty with terror and her body shaking for the physical struggle and the inner turmoil and Michael Fassbender, interpreting Steve, painful victim of the fatal rolling of events.

Assigned a special mention at Ravenna Nightmare Film Festival and the Jury Special Price at Stiges Festival, this movie is not to be missed out.

Posted in Cinema and Film and Horror and Indie and Medium/Full-length by Giulio De Gaetano on November 1st, 2011 at %I:%M %p.