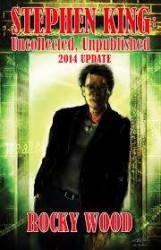 Stephen King: “the writer of our generation“. That is how most fans would refer to the biggest best-seller of our time. For the last 40 years, Stephen King has written almost 60 books, 100′s and 100′s of short stories, scripts, screenplays, a musical play, poems, as well as, acting and directing. He is certainly a man who just refuses to slow down, not even after his life-threatening hit and run accident in 1999.

With books coming out yearly, film adaptations on the rise, “Dollar Baby” short film adaptations getting their own film fests, and Stephen King fan pages popping up all over the Internet – it is clear that Stephen King is not just the writer of our time, but an icon in book history. To help those fans enjoy King’s works are other writer’s who bring to them books about King, his works (lost or rare), and updates on everything King has ever put on paper with new discoveries popping up all the time. Someone has to collect all of these rare written gems and put them all in one place. There are three main writer’s who do this: Bev Vincent, Stephen Spignesi, and Rocky Wood.

All have been approved by King that they know their stuff! One can be a fan of a writer, collect every book available, posters, movie dvd’s & soundtracks, T-shirts, and other collectibles, but a true gem is having ALL of King’s works together in one. That’s where Rocky Wood comes in. He has been collecting and writing about Stephen King for years! And now, Rocky’s latest and sadly, last book about Stephen King has been released and available for sale.

Rocky Wood is a man that found a passion and ran with it. Born October 19, 1959, a New Zealand born Australian, was a writer who paid attention to “details”. Called up by King himself many times (including the recently release of the sequel to The Shining, Dr. Sleep), Rocky helped out with details that even King himself didn’t even know or remember! Rocky wrote books based on King’s works and collected them all such as; The Complete Guide to the Works of Stephen King, The Stephen King Collector’s Guide, Stephen King Literary Companion, Stephen King Non-Fiction works, as well as, graphic novels such as, Witch Hunts which won Rocky a 2013 Bram Stoker Superior Achievement Award in Graphic Novels. He was also the President of Horror Writer’s Association. Rocky worked with Dave Hinchberger and the Overlook Connection Press as well. Sadly, Rocky Wood passed away on December 1st, 2014 of TLS, a disease he fought for many years, but refused to hold him back from his love of writing and living. Rocky left behind his personal family, but also a family of Stephen King fans who knew him well, loved him, and respected him as a writer and friend. Here is Dave Hinchberger’s thought’s on Rocky Wood:

‘Rocky Wood saw the awe and wonder in so many aspects of life. I knew him as a customer first for almost 2 decades. We began a professional relationship when he called and asked me to sell his Stephen King collection when he became ill. It was also then that we struck upon releasing an updated edition of “Stephen King: Uncollected, Unpublished.” We just published a 2014 Update this October. In the short time that I’ve known him, I’d discovered that his name truly fit his stature as a man, a leader, and a friend. He was truly a “rock,” no matter what adversity he faced, and continued forward in his endeavors. Frankly I don’t know how he did it. But then that’s what made him special. I was lucky to get that call four years ago. He made a difference in my life. He still does. – Dave Hinchberger, Publisher, OCP / Stephen King Catalog’

Rocky was certainly a man (as Stephen King put it), ‘..he’s got it goin on.’ You will be greatly missed Rocky Wood. And now here is my book review of Rocky’s book: Stephen King: Uncollected, Unpublished 2014 Update.

This book comes in at 76 pages, but it has more surprises than you think. It is an updated and extended book to Rocky’s 2012 edition of the same title which was a much bigger book. This gem consists of very rare, never-before-seen, and limited edition short stories, plays, poems, and other works by Stephen King that you will find nowhere else. Such things as; a poem King wrote in college, two unpublished short stories he wrote in the 1970′s, a short story he won an award for in High School, two lost stories, and a play he wrote at the young age of 12years old. It also includes magazine short stories, connections to the Dark Tower, and a description of his latest novels like Mr. Mercedes and Revival. And it includes an up-to-date list of all of King’s works. This book is a great handbook for those fans who must have knowledge of all that King has done and try to find those rare gems as well.

I found Rocky’s writing and descriptions very professional, useful, and informative. There were things in this book that a huge Stephen King fan like myself didn’t even know! This is a must-have if you don’t have the original 2012 edition and if you do this makes a great extension of that book. I found myself saddened as I read this knowing Rocky had just passed away and that these were his last written words about King, yet it makes the book more special as well. If you are a die-hard Stephen King fan or enjoy Rocky’s previous works, I highly recommend … Stephen King: Uncollected, Unpublished 2014 Update.