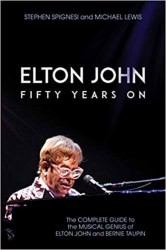 In the October 31st, 2019 issue of the Tri County Sun Newspaper, I had the great pleasure once again to interview author Stephen Spignesi, and discuss his new book, ELTON JOHN: FIFTY YEARS ON. At the end of that article, I promised my review of the book would be in a future issue. Well, now that I have completed reading this amazing book on the works of the iconic Elton John, here are my thoughts.

When you think about some of the great music icons over the past fifty years, you can’t help but think of The Beatles, The Rolling Stones, Bob Dylan, David Bowie, and several others who stood out among the rest. It was several of these bands and singers that helped influence a young man who would also become an icon in the music world, and take the music world by storm. His name: Sir Elton John. There are many books out there about the life of Elton John, but it is ELTON JOHN: FIFTY YEARS ON that gives the fans something really special.

This book begins with a very funny and informative introduction by author, Stephen Spignesi, which I enjoyed tremendously. The book is broken down into sections, with the first being: PART ONE: THE MUSIC. This section lists and talks about each and every single Elton album ever made, and then that is further broken down, featuring every single song (A Side and B Side), on each of those albums. What I really loved is that great detail is given as to what each song is about, what inspired Elton to write that song (generally with Bernie Taupin), and where it ended up on the charts, along with critics thoughts on that song/album. This is not only interesting, but gives great insight into what Elton and Bernie put into each song. It’s not only fun to read all this, but quite an education behind what each song entailed. I truly learned a lot!

PART ONE also discusses Elton’s Top 30 Albums, Top 40 Biggest Billboard Hot 100 Singles, One-of-a-Kind Albums, Movie & TV Appearances, and a look at the 2019 Elton John film, ROCKET MAN, and much more! PART TWO includes sections that feature interviews and essays by some very talented writers such as, Bev Vincent, Tyson Blue, Andrew J. Rausch, James Cole, and there is even an essay contribution from yours truly, me. Which I must say I consider quite an honor to be listed among these heavy weights.

ELTON JOHN: FIFTY YEARS ON as I say, is enjoyable, entertaining, educational, and at times, a very deep and personal look into Elton John’s life. The first half of the book really opened my eyes to the bigger picture of what really goes into Elton’s works. There’s so much more than I ever imagined. The breakdown of every song is truly an amazing endeavor by author Stephen Spignesi, and is the most detailed I’ve ever seen. After reading that section, it gave me an entirely new outlook on what Elton John’s music is really about.

The second half of the book, clearly shows just how much Elton has made an impact on the world. Our personal thoughts, feelings, experiences, inspirations, and opinions. When we hear an Elton song, we immediately remember where we were, when we first heard that song, and it’s a great feeling to know a certain song had such an impact on our personal lives.

Authors Stephen Spignesi and Michael Lewis make this book a fun read. It’s great to read bits of humor, and of course their own feelings of how they regard Elton, even sharing stories like fanboys and music lovers would.

If you want to go past the usual informational read on Elton John, and want more in the way of an in depth look into this iconic musical artist, then ELTON JOHN: FIFTY YEARS ON is definitely for you. I can promise you, you won’t be disappointed. So, as Elton would say….”oh, I’ve finally decided my future lies, beyond the yellow brick road..”