Language
Through the Black Hole » MY BEST FRIEND’S BIRTHDAY: The Making of a Quentin Tarantino Film – Andrew J. Rausch 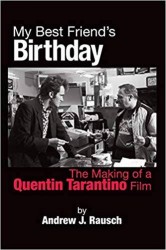 In the early 1990s there was a select group of filmmakers that seemed to ‘nail it’ with everything they did. Robert Rodriguez, Spike Lee, Guillermo del Toro, and Kevin Smith, just to name a few. However, there was one young director among these that would take Hollywood by storm: Quentin Tarantino! I’ve always admired his style, and when I saw Reservoir Dogs, my love for his films has had me following his career ever since.

I have always looked at Quentin as a hero…the underdog that actually made it out of the video store, and into the film industry. Although he is noted for his lengthy monologues, ramblings in the opinion of some, this is a Tarantino signature trademark. Yet in spite of this, he manages to keep us interested with the characters point of view. The violent scenes are so realistic it’s scary, and most importantly, his way of telling a story with multiple storylines, (that eventually entwine), are often complicated, but just another trademark of Tarantino as well. He is as unique, as he is passionate for the art of filmmaking. Has Hollywood spoiled Tarantino? Maybe, but he does things HIS way, and doesn’t care what anyone says or thinks, and in the end he is always praised.

Before his mega-success in the industry, and before he became an A-list Hollywood player, Quentin had to start somewhere. Raised in Southern California by a single parent, Quentin had a huge passion and respect for film. He knew what made films work, what the people wanted, and he already knew how to spot true talent outside the norm. While working at a video store in the 1980’s and early 90’s, Quentin made a film, one that hasn’t been viewed by many.

MY BEST FRIEND’S BIRTHDAY, was shot in black-and-white, and is considered an amateur film, written by Craig Hamann and Quentin Tarantino, and directed by Tarantino. The film surrounds the efforts of a guy who continually tries to do nice things for his friend’s birthday, but these efforts always seem to fall short. Tarantino liked the direction the script was taking, and asked Hamann to add to it, bringing the short script to a total of 80 pages. With a budget of $5,000, the film was shot over a 4 year period of time. Both Tarantino and Hamann had parts in the film, as well as several of their friends from the video store and acting class. It’s a comedy, and considered one of the most over the top Tarantino has ever made. Originally the film was close to 70 minutes long, but with a little mishap (a fire), there was only 36 minutes of the film that was usable. That 36 minute however, was just enough, and the film was aired at several film festivals.

Finally, after all these years, through the talents of writer Andrew J. Rausch, we get to take a look at Tarantino’s tale through an interesting, educational, and entertaining book of how the film was made, the background life of Tarantino pre-success, and interviews with the cast and crew of the film. I found the forward to be especially enjoyable as it described how Andrew’s interview with Quentin came about.

MY BEST FRIEND’S BIRTHDAY: The Making of a Quentin Tarantino Film, captures the readers interest right off, and is entertaining, funny, a “rags to riches”, real life story of a video store clerk who makes if big…BIG! This book is for those who love Tarantino, all types of films, the art of filmmaking, and for anyone who has ever had a dream.

It’s a nice look into the world of filmmaking. Andrew takes his writing talents to a whole new level with this book, and once again gives the ultimate fan a great look at another great, Quentin Tarantino!

I particularly liked the introduction. Andrew makes it so easy for the reader to want to continue on. ‘The Pieces Come Together’, is a wonderful chapter that goes back and tells us of Quentin’s early life, and reminds us why we love him so much now.

The book is full of entertaining and amazing stories from the set of the film, the ups, downs, and struggles of making a movie. It wraps up with a summary of the book/movie, and a script to film breakdown, which I found intriguing.

Here are a few questions I had the opportunity to ask author, Andrew J. Rausch about his newest book:

Tony Northrup – What was it like talking with Quentin while doing this book?
Andrew J. Rausch – I had met Quentin in 1999, he had assisted with some fact checking on a book I was writing that sort of fell apart. Then I finally interviewed him 20 years later. He was in the editing room on Once Upon a Time in Hollywood, and we spoke on the phone for a couple of hours. It was good to finally get this interview (which I had been chasing for a quarter of a century). When we spoke, he was in a great mood and was laughing and having fun reminiscing. He was everything you would want him to be in an interview. It was a great moment for me, and as a professional interviewer I wondered who my next great white whale would be. It’s a weird feeling trying to get something for so long and finally getting it. It was great and confusing all at the same time.

TN – What inspired you to write a book about a film most people will never see, and what would you like most for people to get out of this book?
AR – I saw the book as a sort of biography dealing specifically with Tarantino’s advancement as a filmmaker. I think the film represents a missing link as to how he got from point A, which was making minimum wage, to point B, which is being a household name even in homes that are fairly ignorant about cinema. The book is as much, if not more, about Quentin and his artistic aesthetic than it is the film itself.

TN – What makes Quentin so unique as opposed to other directors that came out of the 90′s?
AR – Quentin is known generally as a director, but that has more to do with his script-writing. His screenplays were daring and different than the things Americans were used to. His incredible knowledge of cinema provided him insight to incorporate elements of things like Japanese, French, and Italian cinema, putting them in a blender with American B-movies. The thing that makes Quentin stand out is his incredible uniqueness, even while often reworking previously existing themes and story fragments. As I state in my book, Quentin is an artist in the truest sense of the word. Whether you believe that or not, it does not change it from being true.

Final Word: Acclaimed author, Andrew J. Rausch is widely respected, and has written a variety of books, from Martin Scorsese, Ed Wood, to Stephen King, and everything in between. His decision to write a book about a Tarantino film (that probably no one today will ever see), brings us something that was twenty years in the making. It is fascinating, and let’s the reader in on a whole new perspective in the world of director, Quentin Tarantino.

Posted in Interviews and Nonfiction by Tony Northrup on February 2nd, 2020 at %I:%M %p.