Language
Through the Black Hole » HIS SCREAM QUEEN – BROOKLYN ANN

Author, Brooklyn Ann, is talented, and has a keen vision of horror, entwined with romance. This makes her books truly compelling. They cover a variety of genres: vampires, heavy metal, gothic, and horror, but they’re all bathed with love and romance.

Just as peers, V.C. Andrews, and Anne Rice, Brooklyn Ann also knows how to entice her readers. Her book series: Brides of Prophecy, Hearts of Metal, and Scandals With Bite, have all been very successful. Now with two books already released, her B Mine series is on its way to being just as successful. Her latest book, His Scream Queen, is the third book of the B Mine series. With the first books, 80s Slasher-theme, and the second books, haunted house-theme, one could only wonder where book three would take us. How about…the PROM!

When you think of the prom theme, most people think of such horror classics (books/films), as Carrie, or Prom Night, but Brooklyn Ann has given us a new reason to fear that one night of the year, where teens dress up, dance the night away, and maybe even earn the title of “Prom King and Queen”. However, in His Scream Queen, titles, and staying alive, are just the beginning!

At Amteep High, the handsome rebel, Lucio Argento, has just been dumped by the most popular girl in school, Brittney Shaw. Brittney isn’t just the most popular, she’s the most evil witch in the entire school. When Lucio is hurt by Brittney’s actions (of dumping him), he decides to have a little of his own playful revenge, to teach her a lesson. Enter Jamie Blair. Jamie is quiet, a book lover, and a ‘keeps to herself ‘, type of student, who lives on the other side of the tracks. Jamie might be the perfect choice for his plot of revenge, but Lucio had no idea, that Jamie would also be the perfect choice, for his heart, as well.

However, there’s more than a simple revenge plot going on at Amtepp High. Lucio isn’t the only one out for revenge. Brittney Shaw, is out to be this year’s Prom Queen, and she will do everything, and anything, to have that one glorious moment in the spotlight.

When animals, and students begin to go missing, it’ll take the teamwork of an unlikely duo to solve the horror’s that have come to their school, and town , from the very depths of hell.

I found Brooklyn Ann’s third book in the B Mine series, His Scream Queen, a fun, and horror filled ride, that captures a true 1980’s feel. With its many references to pop culture , slang, trends and music, you’ll think you’re right back in 1984. The romance that develops between Lucio and Jamie, seems sweet, and initially innocent, but soon ignites with the flames of passion, which often borders on eroticism. In typical B Mine tradition, there’s horror… around every corner. 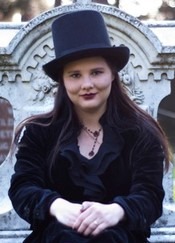 Tony Northrup – Out of all the series you have written, what brought you back to do another, B Mine, installment?
Brooklyn Ann – I had originally planned to do three books, but my publisher wanted four, so His Scream Queen was my 4th idea for a theme, even though it’s book 3. I admit that I was stumped for awhile on what the theme for this book would be. I had Summer Camp Slasher, for book 1, Haunted House, for book 2, and a, Night of the Demons, tribute for the final book, but what to do in between? Then I watched Carrie, for the 167th time, and the light bulb turned on. A PROM-themed horror novel!

TN – What were some of your inspirations for this book, considering it takes place in the 80′s?
BA – Carrie, is a big one, even though that took place in the 70s. I also watched Prom Night, and ALL of the sequels. (Speaking of, Prom Night 2, is definitely the best). 10 Things I Hate About You, was another inspiration, and Lucio looks like Heath Ledger’s character in that film. All of the kills are inspired by Giallo films, especially by Dario Argento, Lucio Fulci, and Mario Bava.

TN – What type of research did you do for some of the scenes about rituals, and the demon, Scar?
BA – Since my demons are secular, and therefore have no connection to biblical myth, I pretty much utilized some basic book and movie devices, and then built my own rituals and mythology from there. As for the main demon’s name, and other demon names that my protagonists read about, there’s a secret about them (that I’m not going to share), because I want to see if the readers figure it out.

TN – What do you enjoy most about writing the B Mine series, as compared to your other series?
BA – The whole purpose of this series was to indulge in my love for 80’s horror films. Although, I do reference those films, in both my Hearts of Metal and Brides of Prophecy series, I didn’t get to go full throttle on celebrating that love, until this one. Same with writing wacky and gruesome deaths. People die in my other series, but not as often as in the B Mine books.

TN – What has the fan reaction been like for you from the first two B Mine books?
BA – The first book received some confusion, because my romance readers were a little surprised at the horror, and horror readers were wary of the romance angle. That said, those who liked it, REALLY liked it. It was also well-received by Publisher’s Weekly.
The second book has received some positive reviews, but there were some issues with the release date, so it didn’t get the exposure it needed. Book three has taken off delightfully.

TN – Lastly, what can fans expect in the next B Mine book? When will it be out? Will we see cameos from characters of the first three books?
BA – The next, and (for now), last B Mine book, will take place in the infamous Raimi House, that’s been teased in previous books, and be my love letter to Night of the Demons, Rose Red, and all things Halloween (the holiday, not the film), and yes, there will be some cameos!
Thank you so much for the fun interview, Tony, and I look forward to next time!

TN – A big ‘thank you’, Brooklyn Ann, for sharing your thoughts with us today. We all look forward to the fourth, and final installment of the… B Mine… book series. For now, you can go to Amazon online today, and buy your own copy of the the newest, and third installment in this great series, entitled… His Scream Queen…

Posted in Horror and Interviews and Nonfiction by Tony Northrup on July 11th, 2020 at %I:%M %p.

Previous Post: ELTON JOHN: FIFTY YEARS ON – Stephen Spignesi   Next Post: EVERYTHING I NEED TO KNOW I LEARNED IN THE TWILIGHT ZONE – Mark Dawidziak