Language
Through the Black Hole » TOURS OF MAINE: Locales Made Famous By Stephen King – Stu Tinker 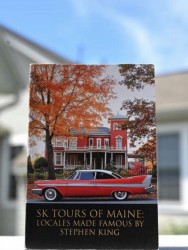 When it comes to vacations, some people pick the obvious entertainment locales: Disneyland, Disney World, Universal Studios, and many other themed parks. Some prefer to take trips to other countries,, but many like to discover what’s in our own backyard, so to speak, discovering the wonders of this great big landmass known as the United States, and you know there’s a lot to discover.

However, if you ask a Stephen King fan, there’s one state in particular you might like to find yourself visiting…MAINE. Sure, it has great beaches, ocean views, beautiful scenic sights, museums, and perhaps the best seafood in the country, but there’s something else that piques the interest of any good Stephen King fan, and that’s Bangor, the home of the “MASTER OF HORROR”, Stephen King!

So how does one see Stephen King’s hometown, should they make this trip to Maine? The best way to see the “ins and outs”, surrounding this world renowned author, is to take the SK TOURS guided tour, hosted by Mr. Stu (Stuart) Tinker. He is a bit of an aficionado in his own right, especially when it comes to author Stephen King’s, Bangor. Stu Tinker, your SK TOURS guide, has been a lifelong resident of Bangor, along with his wife Penney, and their family. Stu once operated the famous Bangor bookstore, Betts, for 20 years, the home of all things to do with Stephen King. He has also been a family friend of the King’s for most of his life.

Stu began the Stephen King tour business way back in 1992, with the Stephen King fan group, SKEMERS. The tour was operated off and on, for families and journalists over the years, while the book store was still open. The tour grew by word of mouth, and became a must-see feature while visiting Maine. Stu has dedicated his all to this tour, and it is the official Stephen King tour in Bangor, second to none!

With guests from around the world, coming and going, seeing sights and locations based on Stephen King stories, I asked Stu if any guests stand out over the years, or touched him emotionally? He replied, ‘We have had a couple of people that were terminally ill that wanted to see “Derry”, while they could. Makes a hard tour (emotionally), but satisfying.’

Now you may ask yourself, what if I can’t make it all the way to Maine, what then? You do the next best thing, YOU BUY THE BOOK… SK TOURS OF MAINE: Locales Made Famous by Stephen King, written by owner/and tour guide … Stu Tinker. This is the ultimate guide for all things King, and the great city of Bangor, Maine (or as Stephen King fans refer to it “Derry”), a town used in many of Stephen King’s stories.

The SK TOURS book is without question, THE book to own, not just for any Stephen King fan to add to their collection, but it goes into great detail, and takes you on a step-by-step tour of its own. From the time you step on the bus , to the time you get off, you’ll feel as though you are right there. It’s a piece of Derry, brought to life, and you can bet you’ll recognize many of the locales King used in his books, especially his beloved, IT.

The book covers every inspiration Stephen King has had for his world famous novels and short stories. Diehard fans will know them right away, while those not too familiar yet, will have their tour guide, Stu, explain each location, and which book they are from. However, not only is the SK TOURS book about Stephen King inspired locations, it also includes a list of the best restaurants, hotels, traveling tips, recommendations, emails, web pages, and lots more! This in depth guidebook covers everything you need and want to know about visiting Bangor, as well as taking the tour. To think, in this relatively small book, is a plethora of information. Easy to take with you as a reference when you do finally get to Bangor, and meet Stu in person. I asked Stu, if Stephen King himself, has ever made a surprise appearance when the tour stops at his famed gated entrance to his property? Stu replied, ‘He has come out a few times, and talked to our guests, not often, but it’s a thrill for everyone when he does.’

Bottom line, I really enjoyed this book. It has fantastic photographs, is packed with useful information, facts, history, and tips for potential guests. Stu Tinker really takes you step-by-step through the world of Stephen King, as though you were actually there on the tour. I highly recommend this book for those who can’t make it to Bangor, and the book itself is just packed as I say, with the greatest viewpoints on Stephen King, and everything you’ve ever wanted to know about…SK TOURS OF MAINE. Make sure to add this book to your ever growing collection of books written by, or regarding Stephen King… you will be glad you did. I know I am!