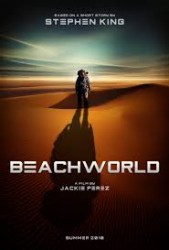 There are actually a few versions of the Dollar Baby film, BEACHWORLD. I have personally seen only one other version, and that was animated, by Dollar Baby filmmaker, Maria Ivanova, so this was the first time seeing a live-action version of this story.

BEACHWORLD is a short science fiction story by Stephen King, which was first published in Weird Tales, in 1984, and later featured in King’s SKELETON CREW. This story takes place in the future, when a spacecraft crashes on a remote and unheard of planet, which is a sandy desert. When one of the three crewman dies, the other two sit and stare at the isolated planet, endlessly watching the dunes.

While in this trance like state, one of them becomes distracted, and decides to head back to the ship to escape the monotony. Eventually another ship lands, the Tarrives, hoping to rescue the stranded survivors from this desolate wasteland. One of the two stranded crewman doesn’t believe the ship and crew are real, and doesn’t want to leave, caught in the planets strange spell.

Jackie takes this short story to high levels with her professional filmmaking talents, amazing vision, and beautiful locations. With a talented cast, an intriguing story, I found Jackie’s version entertaining and nicely done, with minimum expense.