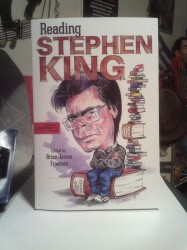 To be a fan of something, anything (movies, books, music, games, tv shows), you can watch them 100 times, read the books over and over, dress up in Cosplay, go to conventions, have huge collections, heck..even have tattoos of your favorite characters! However, I believe a truly, major, die-hard fan does all those things AND does something else: studies! I mean, why not go deep into your fandom and find out fun facts, secrets, behind-the-scenes stories, and trivia that you may have never known before. One of the ways of doing this is by buying books about that favorite thing. In this case, the subject is, without question, one of the top greatest writers of our time: STEPHEN KING!

There have been tons of books about Stephen King, his works, specific books about one subject (like The Dark Tower), trivia books, movie books, bio’s, and Top Best lists of his works. King fans just can’t get enough of the man who keeps them up at night! What makes King SO interesting? How does he get his ideas? Just what makes him..tick? He is a mystery, indeed, but if there are answers, fans want to know them! And so, a new book has been released not just “about” Stephen King, but told in a different and interesting way. READING STEPHEN KING (released by Cemetery Dance Publications), is a book of essay’s all about Stephen King covering all sorts of topics written by a collection of the greatest and very best in the business.

The essay’s are written by famous writer’s who have written their own books about Stephen King. Contributors such as; Richard Chizmar (who co-wrote GWENDY’S BUTTON BOX with King earlier this year), Stewart O’Nan (who co-wrote FAITHFUL with King), Stephen Spignesi (known as the writer who has written more books about King than anyone else), the late Rocky Wood, Robin Furth (the Dark Tower expert), Bev Vincent (another Dark Tower expert and writer about King), and many more! It also has essay’s by directors like Frank Darabont (SHAWSHANK REDEMPTION, THE MIST, THE GREEN MILE), AND Mick Garris (THE SHINING, DESPERATION, SLEEPWALKERS, BAG OF BONES, SLEEPWALKERS, AND THE STAND).

As far as the essay’s themselves, the subjects range from “old school King”, artists of King books, a “101 Class” on King, hard to find works by King, guides, The Dark Tower, fans, God and Stephen King, book reviews, and much more! I enjoyed each one of these essay’s very much! As a die-hard fan myself and creator of a Stephen King fanpage on social media – I found this book to be very entertaining, interesting, heartwarming at times, very personally written, and found out a few fun facts that even I didn’t know (and I know A LOT!). You can clearly see these writers and directors poured their heart, soul, and very personal thoughts and life into their contribution. If I had to pick my fav, I’d have to go with director, Mick Garris’s bittersweet & heartwarming personal tale called, THE ONE THAT GOT A WAY, a true life story of how he once was supposed to direct the film version of, THE TALISMAN, but not all tales have happy endings and I truly was touched by his story and Thank him for sharing it in this book for all to enjoy.

Bottomline: If you are a fan of Stephen King, sure you have his books and dvd’s, but to really learn more about the man and go deep into finding about him so you can appreciate his works even more so, I recommend you finding as many books about Stephen King as you can and start by grabbing your copy of READING STEPHEN KING today! A book all Stephen King fans should be proud to have on their shelf.