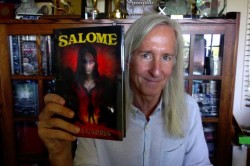 Director/Writer Mick Garris has been entertaining us for years. He has brought many of author Stephen King’s best selling books to life, not only on the big screen, but also through several television mini series. He also has many other films, and television series to his credit. But did you know that Mick is also a well renowned author himself? He has written five books to date, including his new accomplishment, Salome.

TN: With an impressive list of film credits, what attracted you most to get back into writing?

MG: I’ve always been a writer. It’s what I started doing first. I began writing short fiction at the age of 12. When I was a kid the first thing I did was draw, an ability I inherited from my father, who studied to be an artist, and was quite talented. But once I began writing in earnest, I gave up drawing, and I started writing fiction again, seriously, when I was well into a career as a screenwriter and director, mainly to cast myself free of the creative shackles of film and television. In fiction there’s nothing between the writer and the audience–no budgets, no casting, no visual effects, no producers, no test screenings, no studio interference, nothing. It’s a way to have an idea and make it pure. It’s a way to tell a story as a wordsmith, to paint images with language, and project it inside the head of the reader, leaving it to his or her interpretation, rather than having a single view for all to share. So that’s a long answer for “I’ve always done it”.

TN: Share with my readers just who are, “James and Chase Turrentine”? Were some of the characteristics for “James” patterned after your personal life?

MG: These are characters from my imagination, but fed by traits I’ve observed in others. I don’t know a female kid star who got knocked up by her much older producer… but it’s not beyond the realm of possibility. It’s closer to life than metaphor, but there’s some of both. Every character a writer writes comes from within the writer. What I like to do is take some of my most unsavory thoughts or experiences and amplify them by a thousand to paint the characters into horrible situations, then withhold any lifeline from them. Everyone in “The Business” has ups and downs, and some of the thoughts that James has are some of mine, but hopefully not most of them. They are pieces of many people I know mixed with healthy invented ingredients and people.

TN: Will fans of your work see a film adaptation to SALOME?

MG: Well, the reason I write fiction is to not consider all the things you have to think about and address in film and television… not the least of which being commerciality. I did not have a movie in mind when I wrote the book, but I’m starting to think about that possibility now.

TN: What was the main goal you wanted to achieve with this book?

MG: I wanted to tell a “Hollywood noir” story, the kind of character-based, non-cop, mystery that feels real from the inside out, with a veracity of being told in the first person in a way that feels genuine. But I also wanted to address the nature of love. And hate. And marriage. And envy. And even insanity. I am a huge fan of noir fiction, from Raymond Chandler and James M. Cain, to Jim Thompson and James Elroy. This is the kind of stuff I love to read, and to set it in a very real “Hollywood”, as well as the grimy little town of Salome, AZ, was an experiment for me. It gets horrific, but it’s definitely not a horror novel. Salome is a real place, by the way, exactly as described in the book. I used to pass through it on my way to my family’s house in Arizona when they lived there.

TN: What were some of the “reality” inspirations for the location of SALOME and did you scout these locations to have a better feel for the story?

MG: It was the other way around. The actual town inspired the location of the book. Again, I think one of the things that makes a fictional story honest–and what the great noir authors I admire always seemed to do–was to set their stories in very real locations. Aroma is a coffee house that I frequent; I hike and jog in Fryman Canyon all the time. Put real stuff in real places, and the pictures you paint are more vivid, even for those who’ve never been there. You can feel the real. 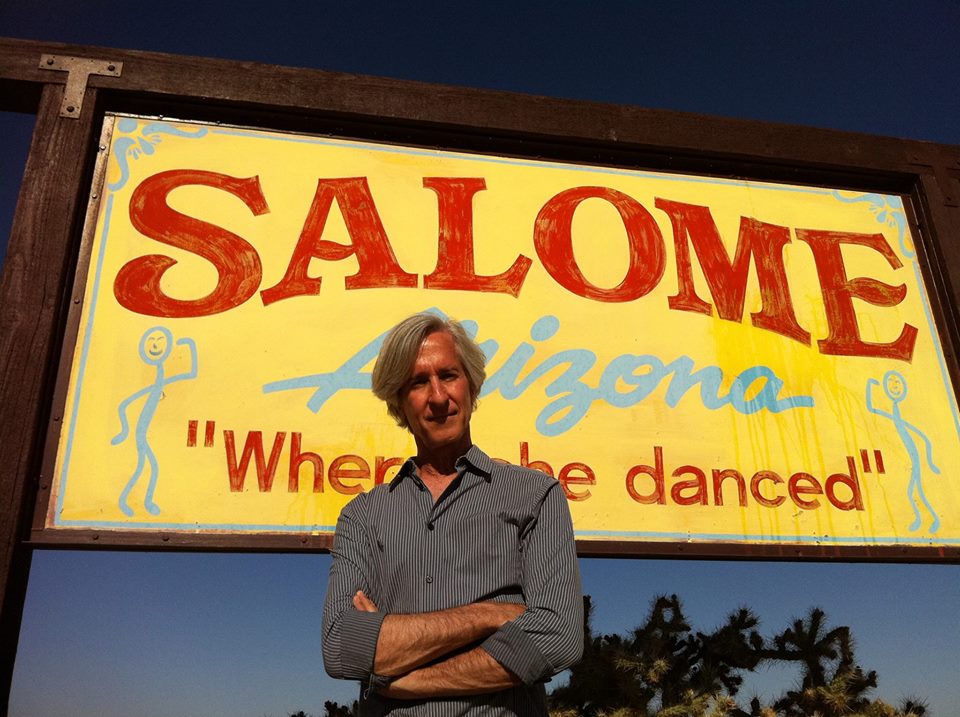 TN: How long was the writing process from start to publication?

MG: Well, the book took a month or so to actually write, not counting the endless thinking about it before I sat down to do it. But it took almost four years for it to actually be published. It’s a small press, Cemetery Dance, who have done almost all of my books, including one coming up late this year, and small press take a lot of time to get their books out.

TN: What is your greatest moment so far with the success of SALOME?

MG: Well, “success” is a strange word. The book is in a very limited edition, so it will never get the chance to be any kind of bestseller. But it’s been really gratifying from readers who have responded so enthusiastically at signings and appearances, and from hearing from people all around the world who managed to track it down. And I actually enjoyed rereading it to proof it for CD before its final publication. So that felt good.

TN: As a fellow Californian, I enjoyed reading all of the names and places throughout Southern California you mention in the book. Would you say this is your way of being a proud Californian? Was writing about these familiar locations half the fun for you?

MG: I am a proud Californian, but it’s hardly a love letter to my home town. But again, the details of place are important for this story, at least, and maybe that’s something that comes from my work as a filmmaker. Locations are crucial to tell stories on the screen, and I’m writing one to go on the screen of your mind. And yes, it’s really fun to dig into places you know… as well as inventing those I don’t. And as detailed as the descriptions are of the town of Salome… I think they’re actually quite accurate, if a bit colorful in the telling, and if they have a Chamber of Commerce (and I’m positive they don’t), they won’t be giving me the key to the city anytime soon.

TN: There are also “nods” to your past works. Is this on purpose, or a trademark to look forward to in future Garris books?

MG: It’s just fun for me. Those who know my work who catch them–or other references that may or may not be sly–should have a good time with them.

TN: This book is about marriage (for better or worse), what has been the success in your own life as a married man?

MG: Letting each other be the individuals we are. Loving deeply and loosely, living multiple lives. When I’m shooting, it is rarely in Los Angeles, where I live and where I was born. It’s no fun to be a “set wife” and to hang around someone else’s set. But to be supportive and loving, and forgiving, and involved as best friends, and all else, has worked for us.

TN: Without *spoilers* for our readers, there seems to be a deep message in the book about the “Hollywood system” and how the studios want you to be, as opposed to how people should be. Being in the film industry, was this a touchy subject to tackle?

MG: I try not to worry about what’s touchy and what isn’t. I think there is a certain level of bravery required of an artist of any kind. I don’t mean to feel lofty about the term, but, even though writing is not heroic for the most part, creative bravery makes for the best work. Hollywood is the Queen of Love and Hate. It corrupts, as success in any field corrupts, and you have to wear armor to keep your sanity and integrity. But it can be the most superficial town and industry on the face of the earth. It encourages you to be all about what you look like, then rips you apart in a casting room to dig deep to expose your soul, then reject you because you don’t look right for the part. It’s about what it’s about. All Hollywood novels are at least partly about what lies beneath the shiny surface.

TN: You have already done some in store book signings, and you also do the Horror/Sci fi Convention circuit. What do you enjoy most when getting close to the fans at these events?

MG: Just meeting and thanking the fans for their support. I don’t do many conventions, but I do a lot of festivals around the country, and I love being exposed to work from other cultures, to see what lays beyond our shores… creatively, socially, and geographically. I like meeting and knowing people who do and don’t do the things I do. I want constant personal evolution, and I want to be a citizen of the world.

TN: Alex Ruiz did the cover art for the book. How did you come about choosing him and his style for the cover?

MG: Alex is a brilliant artist and conceptual designer for films. He’d never done a book cover before, and usually designs amazing creatures and worlds for science fiction and horror and fantasy films… and does stuff for THE SIMPSONS, too! He lived next door to me when I met him. He’s a wonderful guy, very sweet neighbor. I had no idea what he did until his girlfriend showed me his sketchbooks. I was blown away! I asked if he’d be interested in doing the cover, and we talked a lot about old noir paperbacks and their unbelievable pulpy illustrations. Alex “got it” completely. I’m delighted with what he came up with.

TN: Final Question Mick, what’s in the works, and can you share a bit with us?

MG: I’m happy to say there’s a lot going on now. I’m working on a pilot script for a TV series; just finished the pilot and an outline for the whole first season. I might be directing an episode of a favorite TV series from a great genre director. I’m finalizing plans to shoot a Mexican horror movie–that’s right, a Mexican horror movie, in Spanish!–this summer, and a new book called UGLY, coming out at the end of the year. Lots going on, but chances are something will come up out of nowhere, and I’ll be flying off to places unknown on a last-minute assignment. Who knows? I love the excitement of not knowing what will happen next.

So there you go. Mick Garris is a guy who seems to put his all into everything that he does, as well as a a great deal of passion. For all of us who are devout fans, what more can we ask for! It was my distinct honor and pleasure to be able to interview Mick again, and to bring you this review and interview, this time on his new and exciting book, Salome … thank you Mick. Look for Mick’s latest films, books, and future projects at his webpage, Facebook, and at Cemetery Dance Publications.