Andreas Schaap is a german young director still unknown in Italy, he reached our country thanks to the black-horror-comedy MUST LOVE DEATH. This film we saw during Ravenna Nightmare Film Festival 2009, showed itself as an interesting divertissement larded with an haemoglobin injection. Andreas talks about himself and underground situation in Germany, let’s know more about him through these words gathered together with Valentina Colli.

Which are the difficulties you came across when looking for a production through you mother country underground?
Actually that wasn´t too difficult at all. And that´s mainly because MLD was a filmschool project. Anna Wendt who has been studying at the Babelsberg filmschool herself coproduced it with a company she just founded. We also got state funding and found a german dvd distributor that helped financing the movie in the end.

MUST LOVE DEATH contains many ironic hints, placed right where needed to undertone the tension, keep the attention alive and enrich the work. Where did you take inspiration for that?
The main idea of the whole movie was to mix two – at the first sight – opponing genres: romantic comedy and the torture porn. Furthermore I was trying to take both of them as serious as possible – without making fun of either genre. The romcom had to be cheesy, corny, funny and of course sort of romantic on the one hand, whilst on the other hand the splatter elements were supposed to be dark, bloody and as violent as possible. I think it´s mainly this contrast between the two opposites that makes certain scenes in the movie seem ironically. Besides that I worked with a whole lot of clichés and citations that genre fans would probably recognize and enjoy while watching the film. 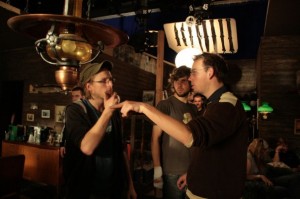 Do you like horror comedies like SHAUN OF THE DEAD or BLACK SHEEP?
Of course, I love those movies. I grew up with films like Braindead and the Evil Dead and I often prefer grotesque horror or splatter films too those who show explicit violence in a more serious way.

Your movie also contains some sort of “romantic” mood, even though infected by horror: did you conceive this idea while scripting or was it already in your original plans?
At first I just wanted to make a simple direct to DVD torture Horror movie about a guy trying to kill himself by meeting up some people from a suicide forum on the internet. But these people were not suicidal at all. They were just searching for a willing victim they could kill for fun. The first draft I wrote was actually pretty serious and violent. Most people who read it thought it was much too hard and I also felt it was missing a sense of easiness. Besides that I wanted the main character to have a comprehensible reason for his will to die. People should really care about and suffer with him. And I sort of found all that in the romcom. And when I started analysing this genre it felt as it was nearly perfect in combination with the torture story. The protagonist suddenly had a goal he could fight for and a reason for his wish to die at the same time – and both is love in his case. Besides that the story lost it´s plain brutality and became enriched by what you call “romantic” mood

What can you tell us about the snuff-movies? Do you think they really go about, somewhere?
Do I think that they actually exist? I´d be surprised if not – even though I´ve certainly never seen one. But especially nowadays I think there´s a market for many kinds of perversion. And if there´s people who would consume and pay for these kind of thing, there´s also people who produce it.

How did you organize the working time: did you have a very low budget which forced you to shoot only during the week-ends or did you manage to properly plan the different shooting phases?
Of course we had a very low budget but it would have been impossible not to plan everything properly. We even shot six whole weeks in a row and worked on the final cut for nearly half a year. But still, everybody was working for free, since we had to put every cent of our budget into the movie 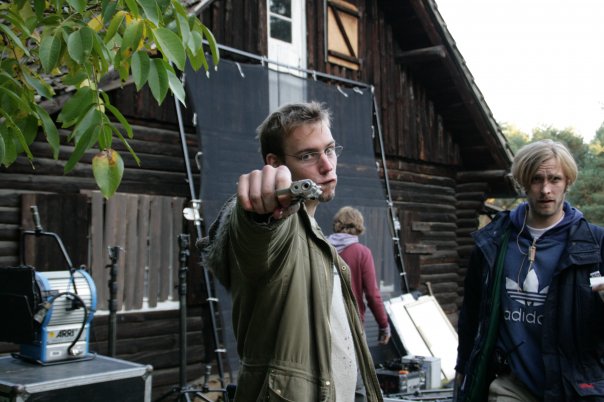 There’s always something going on when shooting, can you tell us a weird episode occured on the set before/during/after the making-of?
One of the funniest episodes was the following: We were shooting a scene in an elevator that we couldn´t put out of service. Since we had to light it from the inside we were rigging a lamp to the ceiling of the cabin, with the cable running through the elevator doors of the level we were shooting at. Consequently the elevator wasn´t supposed to move, because it would have ripped and bursted the cable. So we placed some runners in front of each door on every other level, in order to make sure noone calls the elevator while we were shooting. At the same time our main actor was standing and acting in the cabin and he was so scared that the elevator would move, rip the cable and give him an electric shock inside the metallic cabin. I calmed him down and told him that everything was bombroof. But literally in the second the camera started rolling the elevator began to run down. One of the runners must have left his position, so that someone could call the elevator on another level. Everyone on set was in panic, especially when the cable actually broke and threw out sparks. So I ran down the stairs to see if everything was okay with the actor. He was still inside the cabin, pale as a sheet but – luckily – undamaged.

Tell us something about the german underground.
I don´t think there´s too much to tell, because it´s not very big. Most german independent productions are arthouse films and not too many people care about genre cinema. But still, within the last years there have been some direct to DVD horror movie productions from germany – often produced in english. But these movies mostly aren´t very successful and there are only a few dirctors like Jörg Buttgereit or Andreas Schnaas who are sort of known for what they did – even though Buttgereit didn´t shoot a movie in a very long time (he actually has a little part in Must Love Death and shoots the antagonist in the end).

And what about the horror scene?
s.a.

From your country, can you get a sight, even though narrow, of the underground independent movement to the european/world extent?
Of course. Especially since foreign underground genre movies are much more popular in germany than german productions. Especially films from spain or france (also from the UK and the US of course) are very well spread over here. I liked the development of horror movies within the last years pretty much – especially concerning style and looks. On the other hand I feel it´s been enough blood, torture and violence for decades. I really have the impression that I´ve seen any possible form of visible torment by now and I´m hoping for the genre to come back to the more grotesque.

Must question: which are the best horrors you’ve seen in 2009?
I´ve seen “The human centipede” in Ravenna and enjoyed it very much. Besides that I liked “Thirst” and other corean movies. “Love Exposure” from Japan was brilliant too. Despite the fact that I didn´t like “Paranormal Activity” too much, I think it´s a 2009 must see. And even though it´s not a horror film, I have to mention “Inglorious Basterds” – which is not only my favorite movie in 2009 but for many many years. I´ve seen it so many times and I really love it. 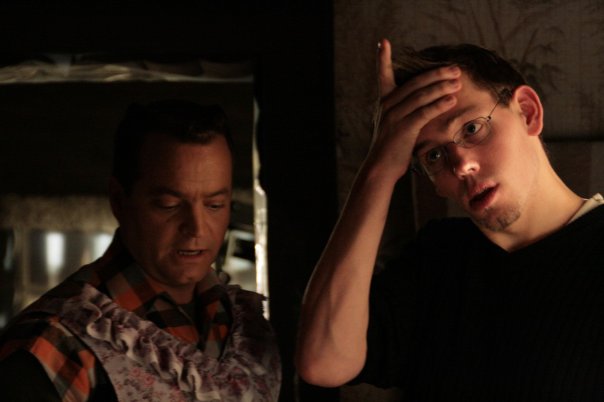 How are you moving to promote MUST LOVE DEATH? Did you succeed in finding a distributor?
Yes, we found a world sales distribution in Canada which is going to sell it at the European Film Market in Berlin this year – I hope it works out well. Besides that we have a german DVD distributor that already helped financing the production and will bring out a “Must Love Death” DVD this year.

By now are you still focusing on this latest product or are you already into some other “work in progress”? If you do, can you reveal us something?
I´m working on many other projects at the moment, hoping to get them financed within the next two years. These are not only horror movies, but also (black) comedies that I´m really looking forward to do. One of them deals with two guys who found their way to happiness by bringing sacrifices, because they believe in some sort of universal balance, where good and bad, luck and bad luck always even out the end. But if you want to inrease happiness you also need to increase the sacrifices. So the guys get sort of addicted to their game.