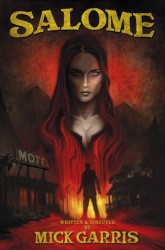 James Turrentine, our lead character, is a famous writer who knows everything there is to know about the film industry, and I mean… EVERYTHING… from the glitz and glamour, right down to the ugly, backstabbing side of the corporate film studios.

James is married to Chase, an actress who is well loved by her fan-base throughout the years, despite her bumpy rise to stardom at a very young age. As with many marriages, the magic often fades, even for those made in Hollywood. When Chase is found murdered in Salome, Arizona, James has mixed emotions.

James had realized their marriage was far from perfect, and that there may have been something going on behind his back, but inspite of all that, there was still the long term commitment to Chase, and more importantly, their own brand of love.

Because of that he is determined to find out… just who… murdered Chase. As with most murders involving a spouse, James was naturally the first suspect, and he hoped to clear any speculation surrounding his name. With detectives breathing down his neck, help coming from unlikely sources, James travels throughout the San Fernando Valley, all over Southern California, to Salome, Arizona and back again, determined to find the clues that will lead to the death of his beloved Chase. However, nothing is always as it seems, and not everyone can be trusted. To find out who killed Chase Turrentine, and enjoy what I feel is a modern day story noir, I highly recommend Salome.

Salome was a fun read. It was interesting, intriguing, a hang on every word, nod to the noir books of the past. Mick takes us on an adventure through the San Fernando Valley, and it was fun to spot references to some of Mick’s other works sprinkled throughout this book (his fans will recognize many of them). I found the two lead characters, James and Chase Turrentine’s lives actually mirrored certain Hollywood couples we often see in the media, and they were as equally captivating. The story was a bit sad as well. Mick captured that “here today, gone tomorrow” aspect of Hollywood.

He also nails the struggling actor aspect, and a “behind-the-scenes” look if you will, of the film industry that most of us are not privy to. All of this mixed in with murder, mayhem, and life after loss, really made for a wonderful read. Mick didn’t lack in creativity, nor imagination. I wonder if there may be a film adaptation of this fine story, but I guess we will just have to wait and see. I am really looking forward to his next book as well. UGLY, will also be released through Cemetery Dance Publications, where you can purchase your copy of Salome, and other Mick Garris books now.