Language
Through the Black Hole » NIGHTMARE ON ELM STREET – Retrospect 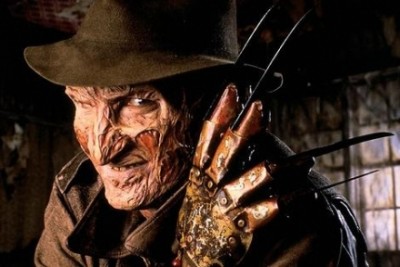 I thought I’d share some thoughts on the most entertaining horror franchise in history! To be honest, I’m not overly excited to see the latest Nightmare film, but if I don’t make it to the theater to see it, you can count on me buying it on DVD. I was burned by the other two franchise remakes (Friday the 13th & Halloween), so I’m not holding my breath on this one. It looks good and it looks like they are putting their own spin on the series, but we’ll see…

I can tell you that I absolutely don’t care about the Freddy make-up in this one. It just doesn’t look right. As far as comparing Robet Englund to the new Freddy; Jackie Earle Harley, well, he has some pretty big shoes to fill. It’s like seeing someone else play Indiana Jones, it’s just not the same. However, look what happened to the James Bond series, people just got use to it. I think diehard fans are gonna go in already hating Haley before they give him a chance & that’s not right either. For now, I’ll say there is only one Freddy Krueger & that’s Robert Englund. NOBODY did what he did to a horror film character like he did. He made it an icon. Plus, he made us keep our nightlights on. Also, he basically put New Line Studios on the map and for that they should be greatful. 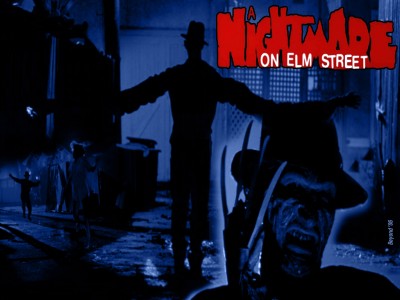 I was fortunate enough to actually meet Robert Englund once. It was back in 1990, I was working at Universal Studio’s Theme Park and they hosted the First Annual Horror Hall of Fame. Since I was an employee, I got to go. Every horror film actor, director, and anyone else related to horror was there. It was a whose-who of horror film celeb’s. I can’t remember them all but there was the Crypt Keeper from Tales from the Crypt, Chucky (Childs Play), Zelda Rubinestein (Poltergeist), Linnea Quigley (Return of the Living Dead), and many others. We were allowed back stage and all I wanted to do was meet Robert. I looked around and there he was right behind me. He signed EVERY autograph to whomever wanted one. He was very nice. I still have that autographed ticket along with Linnea’s to this very day.

As for the Elm St. films, it’s a place in not just horror film history, but FILM History itself. It not only showed us things we’ve never seen before, but paved the road for so many horror films today. When it was released in 1984, Jason (Friday the 13th), was barely holding on, Michael Myers (Halloween), didn’t come around till 1988 when the studios figured with the success of Elm St., they’d better dust off that old William Shatner mask & get on board & get Michael back to work. As for Leatherface (Texas Cahinsaw Massacre), he was MIA at the time. With a successful run, by the early 1990′s, the Elm St. films were running out of steam. It was time to say good-bye to Freddy. Even tho Freddy was gone, the fan’s watched them over & over on VHS, bought the merchandise, & dressed up like him on Halloween. 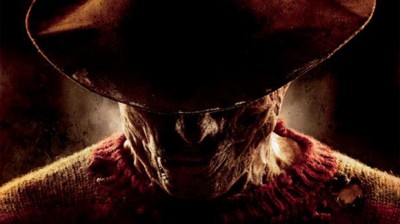 Back in the mid to late 80′s, the Elm St. films were a part of our culture. With Heavy Metal music blasting, parties, and basically a good time to be young it was all part of the time. Now 26 years later since it’s 1st release, the Elm St. films are just as effective today as ever. With Remakes as the latest trend, they can Remake anything they want, but nothing can replace the King of all Horror Films; Freddy Krueger and Robet Englund’s performance as the Best Boogyman of ALL time! Thanks Bob!

My thought’s on the Nightmare on Elm St. series:
(1) A Nightmare on Elm St. – In 1984, we had NEVER seen anything like this. The legend is born, a classic that will live forever.
(2) ANOES Part 2 – A sequel was a no-brainer. It was released the NEXT year, 1985. It was “okay”, but Freddy as a character get’s more of the spotlight.
(3) ANOES Part 3 – A very good sequel & my favorite of the series. Really good story, better effects, & characters Nancy & her father return from the 1st film. Plus, a great title song “Dream Warriors” from Dokken.
(4)ANOES Part 4 – A “okay” sequel. It ties up loose ends from part 3 and opens up a new storyline for Part 5. I didn’t like that they replaced Patricia Arquette’s character with an “unknown” actress. The series isn’t as scary at
this point, but more one-liners & bizarre ways to die.
(5)ANOES Part 5 – Carrying on the character from Part 4; Alice’s storyline continues in this “not-so-good” sequel. Just more bizarre ways to die & at this point the series is getting weaker.
(6)ANOES Part 6 – They say that this is the “Final Nightmare”…yeah, right. This introduces Freddy’s daughter, cool flashback scenes, & terrible 3-D effects.
(7)ANOES Part 7 – It’s called “New Nightmare”, but this is the worst sequel of them all. It has nothing to do with the other sequels, it’s a “movie within a movie”, the actors play THEMSELVES, & there’s almost NO killing. Not to mention, earthquakes every 5 minutes…total waste of time.
(8)Freddy vs. Jason – It was debatable of which series this belongs to, Elm St. or Friday the 13th. Well, if you go to the store & buy the box sets, it’s in both. Getting these 2 together was a good idea & it’s what the fan’s wanted, but it wasn’t as good as I thought it would be. Jason’s appearance is all wrong to begin with & they should have had Kane Hodder play Jason, it was only right & they didn’t. I felt cheated by the *wink* ending by Freddy’s head carried by Jason (who apparently won the battle).
(9)ANOES the Remake – well, I can’t say yet, but my prediction is; it’ll make a lot of money 1st weekend, word of mouth will get around, & they’ll slam Haley’s performance. But we’ll just have to see…