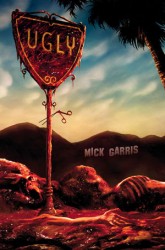 When it comes to writing, they say, “one should write what they know.” Well, Mick Garris knows PLENTY, about living in the San Fernando Valley, and equally as much about the film industry. In his last novel, Salome, he covered both of those subjects, and now in his latest, he draws us back in again to the world of, bright lights and movie stars, or should I say…just another day in the Valley!

Anyone who knows California, will recognize the many references to landmarks, and street names, and anyone in the film industry, will relate to certain parts of this story as well. If you are neither familiar, or know of these references, well then, Mick describes in great, as well as funny, the details that make you feel as though you are right there, sitting next to the main character telling this tale.

Ugly is the story about Terry, a plastic surgeon, who has worked for years on the Beverly Hills “rich and famous.” He makes stars look more beautiful than they already are. However, if they are “past their prime”, Terry will try to perform nothing short of a miracle, to restore the beauty that has long passed. Terry is sarcastic, full of himself, judgemental, and often times, downright rude. Anyone who falls short of Terry’s standards, is beneath him, and considered, a waste of space. Terry stops by a certain restaurant, and it’s in this particular restaurant, that he finally meets his match.

Brittany is far from perfect, and Terry has no qualms about saying so. When things get out of hand, Terry decides to help Brittany, with her lack of physical beauty, to prove anyone can change, and that anyone can be less “ugly”, with the right help… HIS HELP! This story takes a few twists and turns, and is as frightening, as it is funny. To find out how Terry helps Brittany, and what follows, I recommend you buy the book, and discover why it’s so appropriately named…Ugly.

Mick has brought us some of the most entertaining and enjoyable films, and television programming over the years, and now his writing talents are NO disappointment. On the heels of Salome, Mick’s latest novella is just as entertaining and fun, with that sick twist! At times I felt as though the character Brittany, was a nod to Stephen King‘s character, Annie Wilkes, from the book Misery, and I loved that! It’s a revenge story, yet you can understand the logic behind Terry’s actions as well. This was a fun read, and I would recommend it to everyone. Mick’s talents shine on screen, and on paper as well.