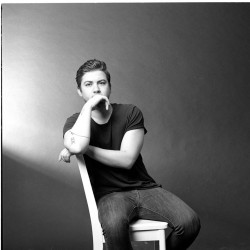 Jon Mann was born on October 31st, 1989.. Halloween, and was born in Fredericton, New Brunswick, Canada. After grade school, he attended Leo Hayes High School, in Fredericton, and graduated in 2007. Jon continued his higher education at Acadia University, majoring in Political Science. He graduated in 2011. Jon also attended the New York Film Academy, majoring in screenwriting, in 2013.

In 2017, Jon, and production partner, Rob Ramsay won at the 2018, National Screen Institute’s Totally Television program for their project, Wolfville, optioned by Take the Shot Productions. Jon’s film CAHOOTS, won Best Film at the Canadian International Comedy Film fest, in 2019. His 2019 film MISSY, was purchased by the Canadian Broadcast Company for distribution, and premiered nationally.

At one time, Jon was also the Communications Correspondent at Acadia’s Men’s Hockey. He also founded Popular Demand Pictures. Currently Jon lives in Halifax, Nova Scotia, and his Dollar Baby film POPSY, is being presented at the Silver Lake Film Fest in Fredericton, New Brunswick.

I hope you will enjoy my exclusive interview with Stephen King Dollar Baby filmmaker, Jon Mann!

Tony Northrup – You were born in, and grew up in the province of New Brunswick, Canada. Share with us some of your early memories of living there, and you first discovered Stephen King’s books. Which was is your favorite King book/film?Jon Mann – One of my earliest memories of growing up in Fredericton was my mom taking me to see Jurassic Park in theaters. That was the summer of ’93, which would put me at three-and-a-half. Going to the rink for hockey, and the soccer field in the summer also comes to mind. I’m still best friends with the guys and girls I grew up playing sports with. When I was about 10 years old, my family moved from one side of town to the other, and I didn’t really have many friends right away, so I was reading a lot. I read IT, and The Shining in middle school, and had seen Kubrick’s The Shining, even before that. Reading IT, reminded me of my friends, on our bikes getting into lame trouble. It completely changed what I thought it meant to be a kid. I hate to say it, but I think The Shining, is still my favorite adaptation. It feels almost sacrilegious to say so. Stand By Me, is a very close second. Mr. King is so good at writing about the idiocy and confusion of boyhood, and young manhood. I think he got me at the right time (laughs).

TN – What made you decide to change from a political science major, to screenwriting, eventually leading you to filmmaking?
JM – Honestly, more than anything I was sort of told to. I’m an English drop out. I did a year-and-a-half with English as my major. I was writing creatively in high school, and as a hobby through my undergrad, and I thought it would be a lot more creative writing, which is my own fault. I got a really bad mark on what I thought was an awesome essay, on Frankenstein, then had a really embarrassing moment in front of my class talking about, The Road, then wrote a terrible essay on Eleanor Rigby. Those were all within 2 weeks of each other. That’s really when I knew it wasn’t for me. I tried to argue my voice too much, without knowing what I was trying to say. I took a really great class from a professor I really admire – The Politics of Water. The department was much more keen on argumentative essays, so it was a pretty natural fit. By fourth year, I was starting to read more and more about film, and film theory, and I was starting to get bored with school. I was a terrible student. I wrote a short story called Ethan, about a young boy in the hospital whose roommate ends up trying to ruin his life. I had such a passion for film, but never thought it would ever be a career choice. I always had a fire in me about movies, but I don’t think I really recognized it until the last year of my undergrad. I was fortunate to get into a great film school, and all of a sudden, I was an A+ student.

TN – Your short films, CAHOOTS and MISSY, have won some awards, share with us what they are about, and how that led you to the Stephen King Dollar Baby Program?
JM – Yeah! Cahoots is a comedy, about a guy who reaches out to two old acquaintances to tell them about his new job. They’re happy for him, because he’s had a bit of a rough stretch, but their patience runs thin with him when he tells them his new gig is doing social media for Isis. It’s a ridiculous concept, so I wrote it trying to make it as heartfelt as possible. It’s a weird look at contemporary friendship, and what it means to take care of yourself in 2019. It won Best Film at the Canadian International Comedy Film Festival, and I’m incredibly proud of it. I love that movie. Missy, was recently purchased by the Canadian Broadcast Company (CBC), for distribution, and is available on their streaming service, CBC Gem. It’s about a man living in the woods who finds a mannequin, and how his life starts to unravel after finding it. It’s a bit of a psychological drama. Rob Ramsay is the star of both films, and absolutely crushes it! Rob is such a talent, and some of the scenes between him and the mannequin are unbelievable from an acting perspective. Rob has a great part in It: Chapter 2, actually. Both films gave Rob and I a lot of validation as to what types of stories we are trying to tell, and I know they went a long way to being accepted into the Dollar Baby Program.

TN – Out of all the Stephen King short stories, what attracted you most to this one?
JM – The ending! I think it’s the quintessential King story. It’s like being lead down a hallway, and each passing door has something creepier and creepier

behind it. Then all of a sudden, the real monster has been crawling on the ceiling behind you the whole time.

TN – What changes did you make to Popsy, in order to make this your own, as opposed to King’s original text?
JM – Not too much. A big part of the short story is that Sheridan is motivated by a mob boss to pay off some gambling debts. I didn’t find it necessary to establish why he was trying to find a kid to kidnap. I think the not-knowing is pretty creepy, too. I wanted to keep the world small, and really just focus on the kidnapping itself. I felt that revealing too much of Sheridan’s motivation would become distracting in an 11-minute short. I had to make some dialogue changes, because obviously in film, you do not have the luxury of knowing a characters every single thought, the way you do in a novel or short story.

TN – So many Stephen King fans want adaptations to be as close to the book as possible, how do you handle the pressure to keep the fans happy?
JM- I think with the success of It: Chapter One (2017), and It: Chapter 2 (2019), we are seeing that it’s not completely necessary to stay absolutely true to the intellectual property. Hell, look at The Shining. Some things work in a novel, but would never work on screen. I think Muschietti did an incredible job with It. At the end of the day, I wanted to make a movie that I would want to see, using a story I admire, from my favorite author. Of course I want everyone to like Popsy, and as a Stephen King fan myself, the pressure I listen to is mostly between my own ears to begin with. I think the fans will be happy, and true fans will pick up on a lot of easter eggs in the film. I don’t think anyone will be disappointed. Pressure is an interesting thing, especially in art. All you can do is bring your eye and your taste to a project, and hope that people will get behind it. So far, I have been fortunate that people have enjoyed what I have to offer!

TN – What was the main goal you wanted to achieve with this film?
JM – It’s probably cheesy, but I really wanted to do the story justice. This is such an incredible program, and I owe so much to Mr. King in my development as a story-teller, and story-digester. The least I could do, is not screw up one of his best short stories (laughs).
TN – Where was the movie filmed specifically, and were there any obstacles to overcome while filming?
JM – We started filming on a Friday night, and we had a mall lined up who backed out on Tuesday afternoon. We had everything signed, and then they read the script. Go figure. Other than that, things were great!
TN – How long was the film shoot, and the process from start to finish?
JM – The filming process itself took about 3.5 days. Fredericton was really accommodating, and the business community there was very welcoming to us. New Brunswick has a great film community, and even though I have been living in Nova Scotia for a few years, I find comfort knowing that New Brunswick will always support my projects.

TN – What is the greatest moment you’ve had so far with the success of POPSY?
JM – Some of the reviews that have come in for the film have made me really proud of what we were able to accomplish. We screened at the FIN: Atlantic International Film Festival in September, and to be there with so many other great films was really special. A lot of the crew, family, and friends were able to attend as well, and that is what is most important to me.

TN – What Stephen King story would you like to adapt on a much larger scale?
JM – Well, it was The Girl Who Loved Tom Gordon. I think that would be an interesting challenge. A Good Marriage, was another story I would have loved to have a stab at. As far as those that have yet to be done, I’d love a chance with Fair Extension. It’s another stereotypically King story, in all of the best ways. It reminds me of Hemingway’s short stories. The Night Flier, too, of course. That story has ‘feature’ written all over it.

TN – Where, and when can Stephen King fans see this film? Will it be playing at any film fests across the globe?
JM – We have some screenings approaching that haven’t been announced publicly yet, but I can’t wait for people to find out. I wish I could say more!

TN – Finally, What is next for Jon Mann?
JM – I’m currently writing a feature film based on a folktale from New Brunswick, about a woman who meets the devil. I’m always writing with my production partner Rob Ramsay, and we are getting together to write our next project in November. I have another short written that I am trying to find a producer for, so if anyone out there is looking for a script, let me know (laughs).