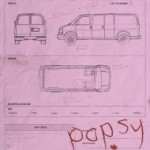 The short story POPSY, was first published in Stephen King’s short story collection, NIGHTMARES & DREAMSCAPES, in 1993. It’s a story about a man named Sheridan, whose a compulsive gambler, who finds himself in deep debt to a man known only as, Mr. Wizard. Mr. Wizard threatens Sheridan with serious bodily harm if he doesn’t pay up, and has way of paying off his debt is through child trafficking, sending the children on a boat to another country.

Sheridan doesn’t want to know anymore than he has to, only wants his debt paid off, so he complies with Mr. Wizards sick request. When Sheridan kidnaps a child from the local mall, he grabs the wrong child, meaning he has met his match, and then some. This story by King is scary, creepy, and entertaining , a good read, especially around Halloween time.

Jon Mann’s vision of this tale is spot on! He grabs his viewers, and draws them in with this disturbing scenario of stalking and kidnapping. He brings the characters to life with a cast that completely embodies those in the story. As the terror escalates we want more. All this eventually leads to death, but whose death?

Jon did a wonderful job with this adaptation of one of the more disturbing subjects that King has broached. This film, as I say, draws the viewer in, and you can’t help but wonder what comes next.