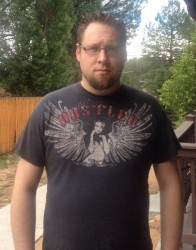 John was born in Uniontown, PA on April 27th, 1981. He attended Uniontown High School where he graduated in 1999. From there he inlisted in the Marines that same year. Upon leaving the Marines in 2003, John attended culinary school in Scottsdale, AZ. However, learning how to cook wasn’t his calling in life and left in 2004 to attend Coconino Community College in Flagstaff, AZ, where he got an AA in 2012 there as well as met his future wife, Ashley.

John Long has said being married is the best decision he ever made and has even helped him with the publishing of WOZ. John is currently attending Northern Arizona University with a Pschology Major with Film Minor. John told me this about being a writer: ‘Harry Potter made me a reader, but it was Stephen King that made me a writer. I hated reading, but I wrote a really bad short children’s story for my grandfather, it meant a lot to him. I kept writing, didn’t know if I was any good or not….just had to get them out there.’ After reading John’s book, WOZ, I can assure you this Independent writer has great promise.

(Q.) Out of all the story ideas you’ve had, what attracted you most to this one to be put out first?

(A.) I guess I’ve had this story idea the longest, and I’ve always thought it had the potential to be pretty good and to stray from generic. I wrote it as a screenplay first and honestly it was just appalling, haha. So, I’d written a few stories and they were getting longer and longer and so I decided maybe this needed to be a novel before it could be a screenplay. I wrote it as a novel and was proud of it. I doubt my work sometimes like any author and I had issues with pieces of this at first but I could also recognize it for what it was, my first truly comprehensive story that flowed the way I needed it to.

(Q.) What inspired you to write this story?

(A.) This is funny. When I was in the Marine Corps we watched Fight Club a lot and when Ed Norton was asked why he bashed in Jared Leto’s face he said something like “I wanted to destroy something beautiful”. I think that started this for me. It was one of my favorite books growing up, but I saw it’s potential to be dark, I guess. The more I thought about it, the more I fell in love with the idea of a horror version of The Wonderful Wizard of Oz.

(Q.) As a new writer on the scene, how do you handle the pressure to keep the fans happy?

(A.) It’s hard for me to answer this question because since I am new, and because I wasn’t sure how Woz would fly, I don’t picture myself as having fans. However, I must acknowledge that I do already have a few fans, and therefore already have people pissed at me for taking my time with Return to Woz. I just remind them that if they hurry me then the story may suffer. No one wants to read a bad sequel and I damn sure don’t want to write one.

(Q.) What was your main goal you wanted to achieve about this book?

(A.) Honestly I just wanted to write my story the way I wanted to and hope people wouldn’t hate me too much for it. I want to write novels for a living. The money would be a definite plus, but honestly I just had a story in my head that I thought other people would like, and no one has thrown my book at me yet so to some extent I may have been right. I have a few dozen stories on the horizon that will follow the Woz trilogy, but one word at a time.

(Q.) The subject of death, hell, the afterlife, God, and other sensitive subjects run throughout the story, how did you handle those topics without getting too political or “preachy”?

(A.) I didn’t really think about it. I don’t have overly religious or overly political beliefs. I just told the story the way it wanted to be told. I’m glad it didn’t come off preachy, but I wasn’t worried about it one way or another.

(Q.) Were there any “scenes” you left out on purpose or at any point did you feel you could’ve broken more ground?

(A.) Nope. I wish I had a bigger answer like I wrote some craziness that had to be taken out, but I don’t edit based on how I think it will be taken. There are some parts I may have not described as much as I maybe should have, but honestly even that is negligible. This truly is the story I want to write and did.

(Q.) What is your greatest moment so far with the success of Woz?

(A.) I guess there are 3. 1. My wife loves it, and so I’m happy. 2. I work graveyards at a gas station in Flagstaff, and I sell Woz to customers. I had a customer come in and ask if I was a Stephen King fan. I said I was a pretty big fan and that I even have Pennywise tattooed on my rib cage, and he said that makes sense because my book felt like early King. 3. This interview/review because I’ve been worried that Woz wouldn’t be noticed, and under the radar is not where I intend to fly.

(Q.) How long did it take you to write this book and the process from start to finish?

(A.) This depends on your point of view I suppose. If you want to know how long from original idea to finished product, a decade. However, if you want to know from the time I officially decided it should be a novel then three months to write, another three or more to edit(though I’m constantly reminded I did this part poorly haha), and another month to publish it on Createspace.com because I honestly had no idea what I was doing.

(Q.) What can you tell our readers about the four main characters this story revolves around?

(A.) Cade is a serial killer, a sarcastic pain-in-the-ass, who is trying to find redemption (sometimes I think he believes he’s the star of an action movie and that’s why he has so many quips and one-liners). Stix is Father Jesse Stix, a priest who has fallen from grace, he’s looking to get revenge, and maybe get his faith back. Vaughn is a lawyer, who hides behind big words and nice suits, but finds he has more to him than most people could imagine. Gale is a young woman being hunted by a Dark Angel, but she has a secret that even she doesn’t know. Death will be played by Christopher Walken if this ever gets turned into a movie, and when I do the audiobook I will be reading all of Death’s parts using Walken’s voice.

(Q.) Who are your writing inspirations?

(A.) Harry Potter made me a reader, J.K. Rowling, but it was Stephen King who made me a writer. I also like Nicholas Sparks because everyone should have a hopeless romantic side.

(Q.) There are “nods” to Stephen King throughout the story, was this done simply because you are a fan of his work?

(A.) Pretty much. I love the majority of King’s work and as a reader of his work I know that he often references The Wizard of Oz, and so I couldn’t help but give him a few nods in Woz.

(Q.) What is one thing you want most for your readers to take from this story?

(A.) Honestly I just wanted to entertain people and take them somewhere else for awhile. I’m not a philosopher and wasn’t shooting for deep residual meaning to linger on my audience. I just want them to enjoy it and hopefully keep enjoying my work.

(Q.) You were in the Marines in your early years, did you take some of the “horrors” of that time with you as inspiration as well?

(A.) Nah. I wasn’t a grunt. I wasn’t on the frontlines. The only horrors I faced in the Corps were bootcamp and alcoholism. Marines have certain phrases though that I’m certain will appear in all of my work. Marines were nothing if not creative. They are the only people I’ve ever known that could use foul language and have it sound like poetry.

(Q.) What advice were you given in the beginning that has helped you get to this point and what advice do you have for aspiring writers?

(A.) I got in trouble a few times in high school for things I wrote and was advised to do something more productive with my time. I think I even offended one teacher with what I wrote, but it wasn’t my fault she worded her instructions poorly. I read On Writing by Stephen King and he said give yourself a word quota every day. That was the best advice I ever got other than my wife saying “If you want to write a novel than write a novel”. Seems simple but it’s true. If you want to then do it and there will always be people along the way to be naysayers but you can choose to listen to them or not. And just be yourself.

(Q.) Is there a “preview” you can tell us about the two planned sequels to Woz and when they will be released?

(A.) Preview? Interesting. I suppose all I can really say is that Return to Woz picks up exactly where Woz leaves off, characters you didn’t think mattered before now do, and the horror quotient has definitely been upped. There are some new characters as well, some are references to the other Oz books. I’m hoping Return to Woz will be out somewhere around Halloween though that may be pushing it. The third one which will be called The End of Woz will come out around…I have no idea. I may take a break and write another novel between two and three. Woz is a dark land and I don’t think it’s healthy to reside there for long periods of time.

(A.) I’m going to keep writing. I have a writing partner for screenplays named Jeremy Cox, and he and I recently finished a horror version of Winnie the Pooh entitled 700 Acres. We also just finished a romance titled Letters and if that screenplay doesn’t take off then that actually might be the next novel I write. The other possibility is actually a novel, semi-autobiographical, called Twenty Minutes about a boy who joins the Marine Corps because he needs a uniform for twenty minutes, he believes it may save his grandfather’s life. Other than that I’ll just be writing at work, going to school, and spending every moment I can with my wonderful wife.

And that sounds like the best plan of all. I want to Thank John Long for his time, patience, and the opportunity he has presented to me and hope everyone will give WOZ a read. WOZ can be purchased at Amazon in paperback or for Kindle.