Language
Through the Black Hole » IT FOLLOWS – David Robert Mitchell 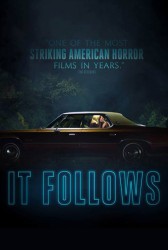 I love me some John Carpenter which might seem like I’m about to start pointing the “thief stick” but really I’m not. To talk about It Follows however is impossible to do and NOT mention the very obvious influence of Carpenter, because It Follows is kind of like an abstract version of Halloween except for the soundtrack which very much sounds like experimental electronic music from the 70’s –so that is VERY John Carpenter.

Again I’m not pointing the thief finger — in fact It Follows is a very original horror film. When Jay Height (Maika Monroe) goes on a date with a hipster and has sex with she winds up seeing various people start to follow her… and then this anonymous starts beating the shit out of her. Now like any good horror film the rules for you problem /monster/super natural entity so they are pretty much, don’t let the thing catch you, it can look like anyone you know and if you sleep with anyone else they will then inherit this “thing” following them and as long as they don’t die you’re in the clear.

I am really charmed by this film, mostly because it’s a very old movie very well wrapped up in a solid repackage of the creepy horror film –a lot of it the film has amazing rhythm and it counts for so much. I get the “story rule” of if you fuck someone you’re them haunted is a new idea but when I say it’s an old movie, it draws heavily from the idea of being recently chased for no reason… Another thing I love about this film is it doesn’t over explain itself, it doesn’t waste time with the “you got to believe me” speeches and it much like older horror films it also has a decent amount of nudity –just not from the lead actors.

It might sound silly to mention something like the film has nudity, but most really terrible horror films try to shoot for a PG-13 rating, keep themselves clean and eliminate too much blood. On the subject of bad old clichés that It Follows does a great job of not falling into, the film centers around a bunch of late teens/early twenty somethings and doesn’t fall into the typical traps of “teen on a road trip film” that The Texas Chainsaw Massacre really went the distance with, with cardboard characters that are merely meat to be stabbed. That would be the one made in the 70’s just for clarity or if any “young people” are reading this.

I really love this film, I don’t want to say too much about it because it should be seen rather than just read about –but it is worth your time and money to see in a theater.