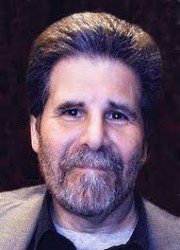 Tony Northrup – Stephen, thank you for taking some time with us today to discuss your new book, Stephen King: AMERICAN MASTER. The last time we did an interview together was September 2012. What have you been up to career wise since then?

Stephen Spignesi – Hi Tony. Many thanks for wanting to talk to me again! I’m very flattered. Since September 2012, I’ve written several books, including Grover Cleveland’s Rubber Jaw, 635 Things I Learned from The Sopranos, 499 Facts About Hamilton and the Rest of America’s Founding Fathers. 499 Words Every College Student Should Know. Dr. Bizarro’s Eclectic Collection of Strange & Unusual Facts, In the Crosshairs, and, of course, Stephen King, American Master. I also published The Titanic for Dummies in Spring 2012 in conjunction with the 100th anniversary of the sinking, (taught a course on the Titanic that semester, too.). I was also teaching full-time at the University of New Haven during the period beginning in 2012. I retired from teaching in August 2016.

TN – Stephen King fans and readers of your works, know you as “The Leading Authority of Stephen King”. It has been quite awhile since your last book on King’s works. So, what brought you back to King’s world that made you decide to do another book about the Master of Horror?

SS – I like to think of myself as “one of” the leading authorities on King these days. There are many writers and scholars who are doing extraordinary work chronicling King’s body of work. As for why now, after 17 years, did I decide to do another book on King, I just thought it was time to revisit his work, both for personal and scholarly reasons. As you know, I really love his stuff (I totally fanboyed and told him precisely that in my inscription on his copy of AMERICAN MASTER), and felt it was important to put together something like AMERICAN MASTER after all the new novels, short stories, novellas, and nonfiction essays he’s written in the past 17 years. Writers change; their work changes; times change; and since King is a truly important writer of the 20th and 21st centuries, I felt the need to take another look.

TN – Let’s talk a little bit about the cover of AMERICAN MASTER, and the title. What gave you the idea of that title, and it appears to have props on the book cover with King, or are those clues? Do tell.

SS – The title became self-evident: King is an American Master, so it was an easy decision. As you know, authors often have little to no say regarding the covers of their books. The publisher’s Art Department is responsible most of the time. In the case of AMERICAN MASTER, I give total credit to my editor Maddie and my publisher Permuted Press, for finding the great picture of King, and to Dean Samed, the UK artist who designed the book’s cover. (He’s also done many SK covers for the UK editions.) Yes, there are a selection of esoteric items on the cover, all of which relate to Stephen King’s work, including a ceremonial dagger, bundled reeds, a moth, a silver dish, a snake skin, a wicker pentagram, an inkwell and quill. At some point we’re going to run a contest for fans in which they have to identify the King work connected to the esoteric item. Including these items was Dean’s idea and I think it’s fantastic.

TN – You have a great guest list of interviews with fellow writers, and some who have worked with Stephen King in some way or another, such as; Bev Vincent, Robin Furth, Mick Garris, James Cole, and many others, and myself who runs a dedicated Stephen King fan page. How did this list of contributors come about, and what do you think of their works and contributions to Stephen King?

SS – These folks—which as you said, also includes yourself, as well as Kevin Quigley, Tyson Blue, Andrew Rausch, RC Matheson, Rick Hautala, Hans-Ake Lilja, Justin Brooks, Holly Newstein Hautala, Stanley Waiter, Jay Holben, and my girlfriend and King collector Valerie Barnes—share two things: they are all very knowledgeable about King, and they are all my good friends. When I decided to dive back into the King Pool, who better to ask to join in than this wonderful bunch of friends? As to their work, they have all made significant contributions to the field of King scholarship, and I can state unequivocally that every one of them have written about King and studied him as a labor of love.

TN – Let me say, I was honored and completely surprised when you asked me to be a contributor to the book and discuss my Facebook Stephen King fan page, All Things King (I thank you again for that). In our interview, we discuss social media and fan pages. How do you personally feel about book lovers going from book clubs and discussion groups of yesteryear, to social media fan pages to talk about Stephen King’s works? Also, do you think there will ever be an even newer medium, say, ten, twenty years from now?

SS – I’m a big supporter of technology as a tool to improve our lives. Thus, I think the hundreds of thousands of King fans who have joined Facebook groups and who, even if they don’t comment that often, read the comments, are participating in a global celebration of our favorite author. This level of community and interaction was simply not possible ten, fifteen years ago. So I think it’s great that I can answer a question from a fellow King fan in, say, Argentina, within seconds. This is using tech in a positive way. As for a decade or two from now…if we believe science fiction and the way things are trending, I think we’ll all be wearing computers in some form, we’ll all be connected to the Internet 24/7, and we will depend on it for an enormous amount of support in our daily lives. We’re getting there with Siri and Alexa. I think it’ll only get more sophisticated, easier to use, and cheaper.

TN – In AMERICAN MASTER, author Bev Vincent’s essay asks the question: Will we still be reading Stephen King in 2068? Well, I ask you: will we?

SS – We will absolutely be reading Stephen King in 2068. King is an important American writer. His best work is taught at both the high school and college levels. (I taught a 3-credit King course at UNH.) He’s been given the PEN Award, the National Medal of Art, the National Book Award, and other awards, and appears in literary fiction journals as well as mainstream publications. These are serious credentials and, thus, warrant study and analysis of his finest writing. Just like we still read and study Twain, Dickens, Poe, Fitzgerald, and just as we will read and study Raymond Carver, David Foster Wallace, Thomas Pynchon, and others who have made enormous contributions to American Letters, King’s work will easily survive another fifty years, and almost certainly longer.

TN – We do have two guest questions for you from my, All Things King fan page. My Co-Administrators, Hans von Wirth from Germany, and Amber Pace from Cheyenne, Wyoming. Hans asks: Has there ever been a Stephen King book you were more excited for release than other King books? And Amber asks: Which of Stephen King’s stories has affected you the most on a personal level, and why?

SS – Thank you, Hans, for asking the question. The answer is without question, 11/22/63. I was ridiculously excited upon hearing about this book. I’ve written two Kennedy family biographies, and have long been fascinated by the Kennedy assassination, so for King to tackle an historical fiction, alternate universe, time travel novel about JFK was the ultimate for me. It had it all. And it was immensely satisfying. And thanks, Amber, for asking your question. Stories that moved me when I first read them, and continue to move me upon re-reading, include “The Reach,” “The End of the Whole Mess,” “Cookie Jar,” “My Pretty Pony,” “The Little Green God of Agony,” “Afterlife,” and “The Last Rung on the Ladder,” to name a few. Each of these were, of course, wonderful to read, but they also stayed with me and often made me think at a somewhat deeper level about them. Loved “Obits,’ too.

TN – In regards to the process of AMERICAN MASTER, How long did it take from start to print to create AMERICAN MASTER? The research time? And were there any difficulties with that research or finding ALL of Stephen King’s works (published and non-published)?

SS – I signed the contract to write STEPHEN KING, AMERICAN MASTER on June 20, 2017. I turned in the manuscript on January 29, 2018. It was published on October 30, 2018. So, 15 months from start to finish. As to the research, I was fortunate to have already done a massive amount of research to write my King Encyclopedia, The Lost Work of Stephen King, and The Essential Stephen King, so it made my task much easier than it might have been if I had not done all that previous work. In fact, AMERICAN MASTER would have probably taken three times as long (or longer) if I was not able to look to my own work.

TN – In AMERICAN MASTER, three of your contributors, Mick Garris, James Cole, and Jay Holden wrote essays asking the question: Stephen King is….”. “Stephen King is….” to you Stephen Spignesi?

SS – Stephen King is…my favorite living writer. I think that pretty much sums it up, and explains everything else I do pertaining to King and his work.

TN – And lastly, What is next for Stephen Spignesi?

SS – I am currently writing two books; ELTON JOHN: 50 YEARS ON and MOZART’S MIGRAINES. The Elton book will be out in 2019; Mozart’s, in Spring 2020. I am also finishing a new novel called THE MIGHTY WORKING, which is (kind of) about reincarnation. Plus I’ve got a bunch of library lecture programs already lined up for 2019.

TN – Thank you Stephen for taking the time from your schedule to sit down with us and share your thoughts. I truly enjoyed AMERICAN MASTER and I thank you whole heartedly for asking me to be a contributor in the book. It is a Stephen King fans dream come true. Thank You! And the best to you in 2019!

SS – My pleasure, Tony! And my best to you, your family, and all ATK friends!

Stephen King: AMERICAN MASTER sold out its first printing in pre-sales in October 2018, and has since had a second printing. It has been a huge success and you can buy your copy (along with all of Stephen Spignesi books) at Amazon, follow him on Facebook, and find my Stephen King fan page mentioned in this book at All Things King: A Stephen King Fan Page, on Facebook.