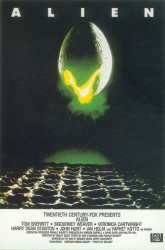 In the 1970’s, science fiction was at the height of its popularity, and some of the most classic films in history were released during that decade. WESTWORLD, PLANT OF THE APES, THX-1138, LOGANS RUN, and SILENT RUNNING, were considered some of the greats. However, it wasn’t until 1977, when a little film called STAR WARS hit the box office , changing the genre completely, taking it in a new direction.

It broke box office records, and the film would launch a franchise beyond moviegoers dreams. With the success of STAR WARS, science fiction films were in demand more than ever. That demand was met on May 25, 1979, when the first true science fiction/horror crossover film was released … ALIEN.

Director Ridley Scott, known for many box office successes (including the 1982 science fiction hit, BLADE RUNNER), brought one of the most iconic films to the big screen with the release of ALIEN, and made scifi/horror history. ALIEN was considered the first of its kind in this new genre, and left moviegoers wanting more. It’s been 40 years ago this week that the original first film hit theaters around the nation, and I am betting that some of you who are reading this article remember seeing it way back when. It was followed by several sequels, and they are great films, however, it seems that everyone who has seen this spectacular franchise finds themselves revisiting the original film that kicked it all off, ALIEN.

The story is about a flight crew on the ship, NOSTROMO, who awaken from cryo sleep, and are heading back to Earth after a long mission in space. They are greeted by a distress call from another vessel that needs help, they decide to investigate. As they enter the moons system, they sustain damage to their own spacecraft upon entry of the brutal atmosphere. While several of the crew stay behind to make repairs, the others investigate, and look for any survivors of the distress signal they received. When one of the crew members discovers a batch of alien eggs, that’s when the real story begins! I highly recommend… ALIEN.

There are some films that are just so good, so original in concept, they break the mold, and pave the way for what’s to come. ALIEN is one of those films. It has everything: a perfect cast (Sigourney Weaver, Tom Skerritt, Veronica Cartwright, Harry Dean Stanton, John Hurt, Ian Holm, and Yaphet Kotto). It has a phenomenal musical score by composer Jerry Goldsmith (also known for his music in the film, POLTERGEIST), and of course his signature style is recognizable. The special effects are beyond fantastic. Many films made during this era used models, matte paintings, puppetry, and amazing set designs. 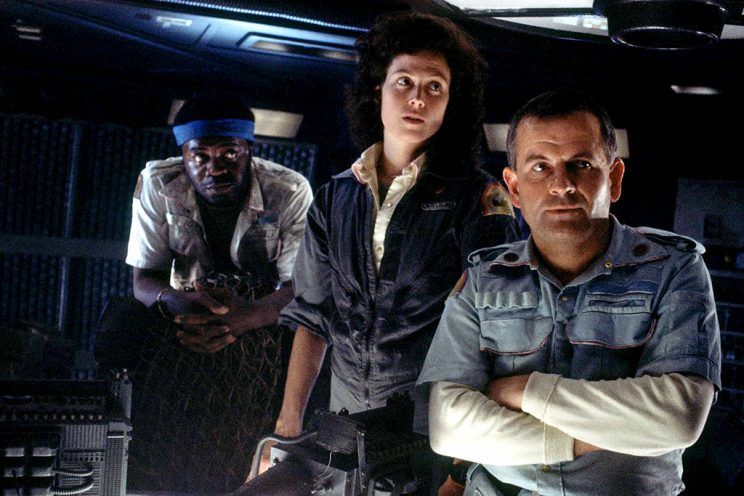 The writer of the film, Dan O’ Bannon, would later go on to direct the cult horror film classic, RETURN OF THE LIVING DEAD. Director Ridley Scott went on to do many great films such as, LEGEND, BLADE RUNNER, BLACK RAIN, THELMA & LOUISE, GLADIATOR, THE MARTIAN, BLADE RUNNER 2049, and many others. However, ALIEN remains his most successful, and fan favorite film to date. It launched a fan base that is bigger now than ever, and has branched out into other areas promoting the franchise through the sales of ALIEN toys, figures, collectibles, t shirts, games, and many other forms of merchandise. The film, ALIEN had over 200 crew members, was filmed from July to October 1978, and it was nominated for, and won numerous awards, including an Academy Award for Best Visual Effects in 1979. Sigourney Weavers iconic character, ‘Ripley’ would return to the ALIEN franchise in ALIENS (1986), a huge successful sequel directed by James Cameron, ALIENS 3 (1992), ALIEN: RESURRECTION (1997). The ALIEN franchise did a crossover with another scifi/horror franchise: PREDATOR. In 2004, ALIEN vs PREDATOR , and in 2007 ALIEN vs PREDATOR: REQUIEM. Ridley Scott returned to the franchise in 2012, with the prequel to ALIEN called, PROMETHEUS, and another sequel in 2017, ALIEN: CONVENANT. Ridley says there will be a third PROMETHEUS film, and a fifth ALIEN film soon, and new news of a possible ALIEN television series.

There is so much more to discuss about this classic film, but if you want to experience a truly amazing classic science fiction film, that is just as good now as it was 40 years ago , then gather up the family, turn down the lights, and return to the cold depths of space… because remember: ‘In space, no one can hear you scream!’ Happy 40th Anniversary… ALIEN.