Language
Through the Black Hole » THE DOCTOR’S CASE – James Douglas 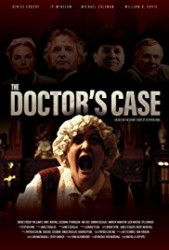 THE DOCTOR’S CASE, was first published in 1987, in the Centennial Collection of, The New Adventures of Sherlock Holmes. It was later reprinted in the Stephen King short story collection, NIGHTMARES & DREAMSCAPES, in 1993. The story is narrated by an aged Dr. Watson, who tells the tale of the murder of Lord Hull, which brings the famous Sherlock Holmes out of retirement to solve what just might be his last case.

It’s Inspector Lestrade, who calls on the famous duo to solve this murder of a wealthy, not well liked man, who has a family that is out for one thing: his money! However, how can there be a murder when it seems impossible for anyone to have gotten in or out of the scene of the crime? Only from the mind of Stephen King, and through the vision of James Douglas, can we obtain the answer, and what an answer it is!

I have seen many Stephen King Dollar Baby films, and without question, this is one of my top favorites! It’s very impressive for James Douglas’s first film as a Dollar Baby independent director. The locations and sets are amazing, the musical score lends an eerie quality, and the casting is great! James not only features new upcoming actors, but also has the support of two veteren actors, who have both been in prior King films, Denise Crosby of PET SEMATARY, and William B. Davis, who was in THE DEAD ZONE, and the 1990 version of IT, but is most noted for his long standing role as the “Smoking Man”, on televisions, THE X FILES.

THE DOCTOR’S CASE is the only Stephen King short story about the famous Sherlock Holmes, and the film will appeal to both King and Holmes fans alike. James did do something with this Dollar Baby which I’ve never seen before in the short films category , he added a scene after the credits! I loved that extra touch! I can honestly say that I hope all of you who have the opportunity to attend the next, “It’s a Dollar Baby Independent Film Festival”, will look to see if this fine film is among those presented, as you will thoroughly enjoy it.