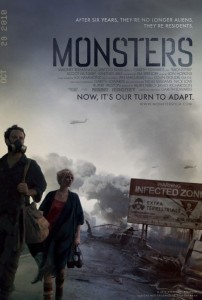 The “Riding of the Valkyries” resounds through the silence of the night, whistled by a massive soldier riding his battle vehicle. It’s dark, two figures – a man and a woman- wait, until the slashes of the machine guns break the stillness…and huge creatures begin their fight across the sky.

North America has been detatched from South because of a infected area, generated after an alien invasion. A borderland along which runs a sort of a Great Wall of China, built up along the edge to contain the creatures. In this state of tension a photographer, Andrew, has to lead his employer’s daughter, Samantha, through the infected area, to bring her back to Mexico from the States. During the travel they’ll get to know the aliens’ nature and how much the earth changed after their landing. A long and painful trail to run.

MONSTERS is about a real human path. The aliens are only an excuse, the black contrasting to the white, the north giving sense to the south, useful to stand a human story out of a subhuman context, thus highlighting the boundaries of pain. Andrew and Samantha are two souls running away from their lives but powerfully recalled back to them. He’s got a son kept apart from him by his ex partner who denies him the fatherhood, she is moving forward to an unwanted marriage. A trail which cannot be easy (the ferry) but that slowly will drag the people towards an interior path (the forest). Plunged into an unnatural silence (music is quite absent).

Even though nothing lets imagine it, MONSTERS costed less than 500.000$, an extremely low amount. To keep into this budget Gareth Edwards not only directed the movie but he also took care of the special effects, while locations have been set-up in real spots, no sets and no walk-on actors have been used and the rehearsals entirely took place during just 3 weeks. Nevertheless the final product looks far away from the independant productions, also thanks to a cast (Whitney Able e Scoot McNairy) perfectly plunged into their roles and believable in their inner dilemmas.

MONSTERS isn’t though naivety free, as for example the choice of showing the alien creatures from the very beginning, thus partly breaking the tension. Moreover the ending seems a bit forced and a deeper look into Samantha’s charachter would’ve helped. Many, unavoidable, quotations, most of all from Jurassic Park (the scene having the jeep thrown in the air by the alien) and District 9 (the landing of the aliens and the xenophoby themes), even though the movie never results derivative.