Language
Through the Black Hole » ONE FOR THE ROAD – Jacob Norlin

ONE FOR THE ROAD – Jacob Norlin 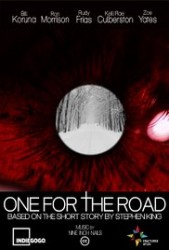 Stephen King’s short story, One for the road, was originally published in the March/April of Maine Magazine in 1977. In 1978’s short story collection, Night shift. The story is a “sequel” to the King classic novel, Salem’s Lot.

On a cold , blizzard night, a young husband enters a small bar in a town not too far from Jerusalem’s Lot where the events of Salem’s Lot took place a few years earlier. The man is frozen to the bone, tired, and half dead from the cold winter storm outside. He tells the old men in the bar his car broke down and he must get back to his wife and child he left there. The old men fear the worse as they remember the events and horrors that took place in Salem’s Lot before. They fear and have heard rumors that vampires still lurk in the area and something might have happened to his family. They head out to the abandoned car and what awaits them is a horror beyond this world!

I found this Dollar Baby adaptation very entertaining. I enjoyed seeing a “sequel” to one of King’s stories and it was done right. Jacob captured the feel and vision of King’s story, but putting his own spin on the tale. The winter outdoor scenes were very eerie and creepy, keeping the suspense building for the viewer. The cast all did a fine performance and well done. Very few King adaptations stick to the original story, but there are some that are adapted very well and Jacob’s One for the road is one of those.