Language
Through the Black Hole » THE FAPPENING – Sean Weathers 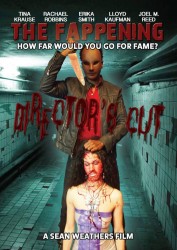 What do you get when you cross the comedic dialogue brilliance of Kevin Smith, the grittiness of an 80’s Able Ferrara and the sleazy fun of Russ Myer? You get the films of Sean Weathers.

About a year ago I wound up seeing Scumbag Hustler and I feel out of my chair laughing. Given the quality of a lot of the stuff I see I guess I should clarify, I feel out of my chair laughing with the film and in a very good way for a seemingly no budget feature length picture –as opposed to AT the film. However pulling off such a feat makes sense because of the intelligence behind the writing and direction will of course spill over into the production as whole.

The Fappening takes all the things that I loved about Scumbag Hustler and builds on them creating a dark sometimes subtle, sometimes not so subtle, comedy reminiscent of John Waters’ humor based on manners faux pas. Personally, I’m a sucker for subtle vulgarity and maybe that’s why I found myself again laughing in the middle of the night trying not to wake the children, however I made it a point to sit on the couch as to not fall out of the chair.

I guess I should back up to last year again, in 2014 there was a massive cellphone hacking where a bunch of ingénue starlets had their naked pictures suddenly plastered all over the internet, including but not limited to Jenifer Lawrence and Kate Upton amongst others –just a little history for anyone who has been living under a rock. This is the premise for The Fappening which given that the film falls into the horror genera don’t be misled in to thinking that the film is merely a montage of blood and boobs but rather it’s a taking some very fun and deserving shots at the vapid emptiness of celebrity culture and how a hollow headed pretty face can become famous. A fame given to said pretty face (and body) for doing nothing more than having there naked photos or sex tape leaked.

After director Allen Smithee’s casting couch pics and videos are leaked he finds himself in hot water with 30 something odd actresses. While this gives the actresses careers boost, Smithee gets a reputation of sleaze about town and finds himself out of work. To add to his troubles he owes money on credit cards, to his land lord and his drug dealer and Allen starts to crack … and actresses start to die. The cast of The Fappening delivers solid performances and is rounded out with appearances by underground film starts Tina Krause, Troma’s Lloyd Kaufman and Sean Weathers –who wrote and directed the film as well. Sean is a 20 year veteran of the New York film underground and has been getting some kind of distro for all that time, which in my opinion makes anyone a star.

The Fappening is a lesson to anyone with camera and real dream to make a film, lesson being budget does not dictate quality of film –you can do a whole lot with nothing and still make something great.

* Not to be confused with the director of Hellraiser 4,” “I love NY” and “Catch Fire”, totally different Allen Smithee.