Language
Through the Black Hole » PARANOID: A CHANT – Jay Holben 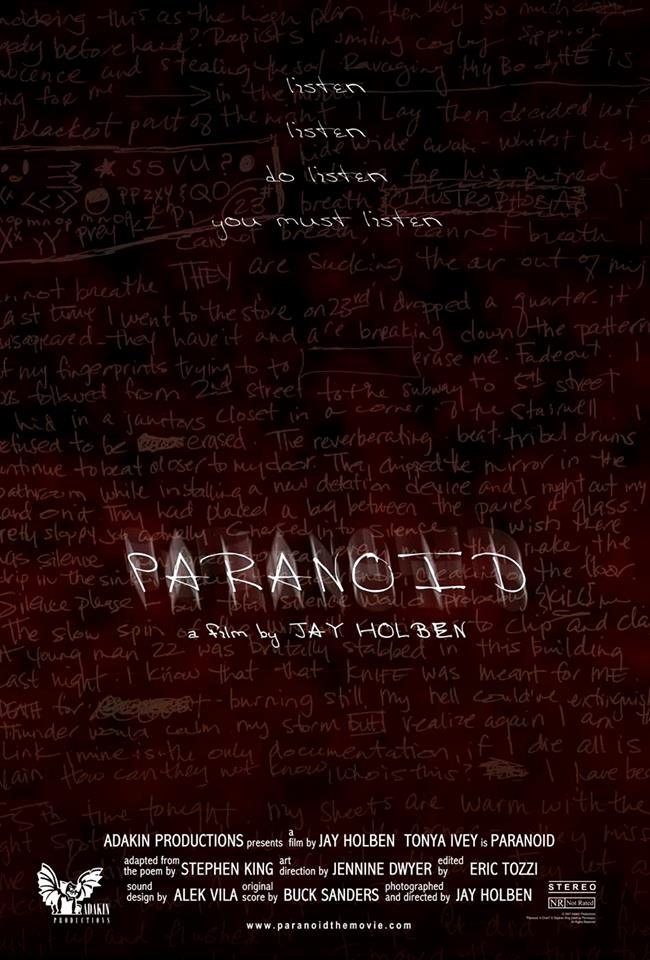 It’s time again to bring you the very best in Short film entertainment and by doing so that means, yet another review of a “Dollar Baby” brought to you by the Stephen King Program. King’s “Dollar Baby” film program is for up-and-coming filmmakers to show the world their work and at the same time adapt one of King’s short stories to scare fans around the world. This time, our “Dollar Baby” is from filmmaker Jay Holben and he has adapted King’s short story, Paranoid: a chant, from the book, Skeleton crew.

This story is actually based on a 100 line poem that was published in King’s 1985 short story collection, Skeleton crew. It is a dark, eerie, and moody story about a young girl (played by Tonya Ivey), who is in a motel room deep in an unknown city, keeping herself from the outside world. She is, of course, “paranoid” by recalling all of the wrong doings that have happen to her throughout her life. Ranging everything from a waitress at a diner to faceless men standing on a corner … waiting for her (she thinks). She catalogues all of these wrong doings in 100′s of notebooks and her walls in her motel room are covered with newspaper clippings of what she believes are government conspiracy theories. She is troubled, a schizophrenic, and on the edge of insanity.

Out of all the “Dollar Baby” films I have seen, without question, this is the darkest, creepiest, glued to the screen, eerie, most gothic filmed film I have seen. Jay truly makes you feel her “paranoia” while you look for a door to escape that horror she has built for herself. The actress (Tonya Ivey) did a wonderful job at covering every possible sense in the human psyche there is. I felt very disturbed after watching this film and agree that Jay Holden has learned his craft well. This “Dollar Baby” was shot on 35mm color camera and in a week’s time. Jay has said he had a challenge on his hands when trying to collect 100′s of notebooks, shopping at every store he could find so he could have enough for the shoot.

The newspaper clippings on the walls in the girls motel room were cut from The Globe, The National Enquirer and The Star which were stained with coffee and cooked in an oven to give it that “old” look. When asked what he wanted to achieve with Paranoid: a chant, Jay replied, “… I wanted to get under people’s skin a bit….I wanted them to have a chance to look inside the mind of a woman who isn’t particularly healthy and not really enjoying being there…“. The film/story also has tie-in’s to The stand (“a man with no face” which was described as Randall Flagg before) and also The Dark tower (the can-toi).