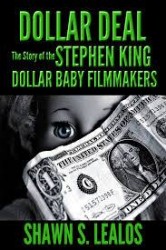 Just about everyone in the world know’s who Stephen King is. He is well-known around the world for scaring us with his books, movies, and television series. He is one of the biggest authors of our generation and with over 60 novels, over 50 films, and many well deserved awards under his belt – King has earned his spot in writing history.

However, back in 1976, King had the idea to have film students adapt his short stories into short films. These films were called, “Dollar Babies” because it cost the filmmaker $1.00 to be paid to King himself. The program still goes on to this day almost 40 years later and over 80 films have been made which have played around the world at film fests everywhere. These are very rare gems indeed for any Stephen King fans to witness and they can be at film fests near you. Just check the “Dollar Baby” webpage for details. With all those films, talent, and knowledge someone had to capture it all and share with the world all that information so they too can learn about the “Dollar Babies” especially if you’re a Stephen King fan. Author Shawn S. Lealos did just that very thing.

Shawn’s new book, captures the amazing talent known as “Dollar Babies” by interviewing 19 of them for his book. Inside we hear from the biggest and the best, how they brought their visions to the screen, and the struggles along the way. This book is packed with tons of information about the “Dollar Baby” film program, the history, details on films that were adapted, and the future of the “Dollar Babies” themselves. As one of the biggest Stephen King fans around, I have witness some of these films at films fest and I found it very interesting getting the backstories of them by reading this book. Some fans won’t have that great opportunity to see these films and this book captures everything you need to know next to seeing the film itself.

I found this book very entertaining, educational, funny at times, and a true gem to have in my personal Stephen King collection of books and collectibles. If you would like to learn more about the “Dollar Babies” and these films as well as support an Independent author, then I recommend picking up Dollar baby: The Story of the Stephen King Dollar Baby Filmmakers at Amazon and remember to leave your thoughts on the book there as well to show your support.