Language
Through the Black Hole » THE BOOGEYMAN – Jeff Schiro 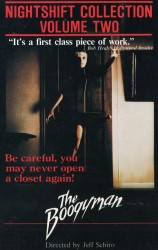 The short story of The boogeyman, was first published in March of 1973 in Cavalier magazine and in 1978 published in Stephen King’s collection of short stories book, Night Shift. The story is about a husband and father of three, Lester Billings (played by Michael Read), who comes home only to find his 4yr. daughter dead in the bathtub. Later, his 5yr. son dies in bed.

The police and coroner call them both “crib death” and contusion on their head. The police can’t get any information from the wife and Lester can barely speak, let alone make any sense to them. Once Lester gets to the psychiatrist office, he open’s up more and tries to explain to the doctor that it wasn’t him or anyone else, but it was The boogeyman. As Lester goes over and over of the events that took place in his home and the death of his children, the question begins to rise: Is Lester the murderer of his children or is it indeed the Boogeyman himself? Or is it something else?

I was beyond thrilled that I had the honor of seeing the very first “Dollar Baby” film, The boogeyman. It is certainly dated, first released in 1982, it had a very low budget/grindhouse type look to it that made the film feel more eerie. The way the lead actor went from father, husband, paranoid, and possible murderer was quite interesting. And of course, that questionable ending stays in your mind even after the credits roll. I enjoyed watching this film, but it is dated quite a lot and that brings the quality down just a little. However, it is well told and a very good adaptation of King’s tale.