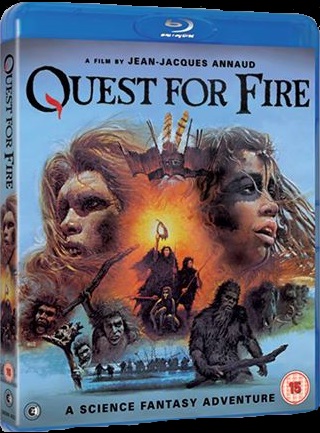 A primitive is sitting near a fire, inspecting and somehow adoring it. When this natural fire extinguishes, the primitive can’t figure out the reason but he gathers all his strengths to find out another source like this. Naoh, Amoukar and Gaw begin a travel as to understand the power of the fire … and the Quest for fire legend begins.

This tribesmen travel takes several days of wandering ’till the discovery of a cannibal outpost, where these people are able to produce fire. The saving of a young woman, Ika, is the (probable) key for their quest … and the escape starts.

Quest for fire represents an actual subject: men run trying to reach an idea, a discovery useful for mankind progress but opposing forces hide in the shadow trying to wipe away all hope of progress in a sort of instinctive stuck in the past … these forces are led by men themselves. This man vs man battle perfectly shines through the words of J. H. Rosny novel (1911) and the images shot by Jean-Jacques Annaud, who has been helped by the pen of Desmond Morris and Anthony Burgess.

Second Sight blu-ray highly underlines the beauty of the nature, emphasising colours and details, and adding some useful extras as Jean-Jacques Annaud & cast commentary, a really involving engaging “Making of” and an interview with the director.