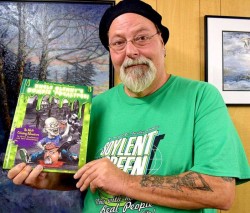 Trends come and go, but one of the most recent seems to be sticking around and is popular among adults. I’m talking about coloring books… for adults! Yes, that childhood pastime has returned, but this time it’s with themes that appeal to the nature of us grownups, and with a vast variety of subjects, this new market has opened the door for many artists and illustrators, allowing them as well, the opportunity to do something fun and whimsical with their art.

Glenn Chadbourne, who is well known for his “extraordinary horror art”, has also illustrated several Stephen King novels. Those of us who are avid readers of the author, know and recognize Glenn’s trademark illustrations immediately. However, it’s not the illustration of yet another great novel I am talking about here, rather Glenn’s latest endeavor. ZOMBIES are everywhere… movies, television series, collectibles, Zombie conventions, you name it, and Glenn Chadbourne has made his own mark in this ever popular genre with … UNCLE GLENNY’S ZOMBIE ‘POCALYPSE!

Yes, and adult themed coloring book! What better way to have fun than with Zombies when you are already a noted horror artist? This coloring book is a lot of fun! There are all sorts of characters, scenarios, and themes throughout the book. The art is so detailed it is amazing to look at even before you start coloring. It’s funny, creepy, and gross at times. Once you begin coloring, the pictures really come to life…no pun intended!

There is a nice intro from Glenn Chadbourne himself, and a short bio on the back. If you love Glenn’s art, have enjoyed his illustrations in Stephen King’s novels, and are a fan of the zombie genre in general, this is a must have for you! Your inner child will thank you. You can find…UNCLE GLENNY’S ZOMBIE ‘POCALYPSE … adult coloring book, at the OVERLOOK CONNECTION webpage.

Now, here is my exclusive interview with, Mr. Glenn Chadbourne! 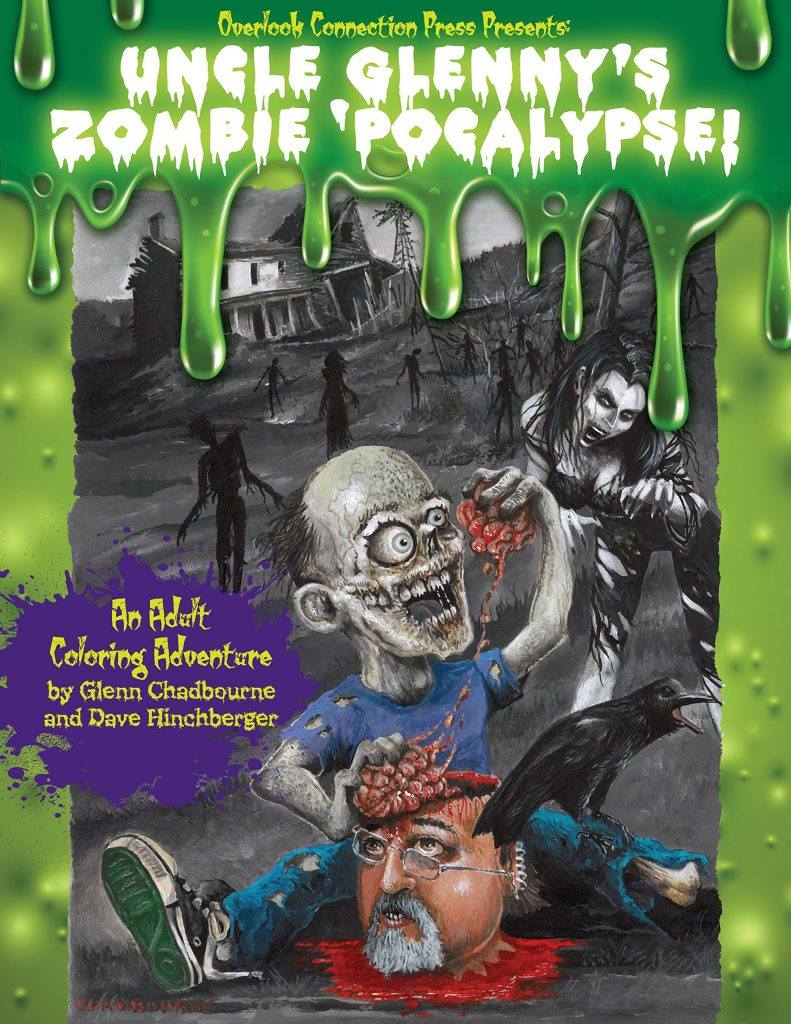 TN: What was it like for you growing up in Maine, and how old were you when you discovered you loved drawing?
GC: I grew up in the 60s/70s and Maine was a very different place than it is today. In ways it was a more innocent place, with a sort of Norman Rockwell feel … but thinly veiled beneath that exterior it had a grizzled edge. There was a lot of abuse that went on and never got reported or brought into the light of day. A lot of alcoholism, a lot of commonplace violence … actually a shitload of violence. You could see it on the faces … a rough edge. It was more isolated back then and folks dealt with their own situations as best they could. In short, it WAS like a Stephen King novel! As for my artwork, I just drew things from the time I could hold a crayon pretty much. I was an only child so that’s how I amused myself.

TN: Who were some of your inspirations?
GC: Two of my heroes as a kid: my inspirations you might say, were Bernie Wrightson and R Crumb. I think my style morphed into a sort of hybrid of those styles, and then it stitched its own footing as time crept along. Another fav’ of mine was Richard Corben. I was big into underground comics as a kid. Zap, the Fabulous Furry Freak Brothers, Tales From The Leather Nun. Also all the Warren magazines and the Ec comics–into their third of forth reprints in those days. Warlock Magazine, Web of Horror, the Witching Hour etc etc. You get the picture.

TN: Some of your art reminds me of the artists from MAD Magazine, were any of the artists for that publication inspirations as well?
GC: Oops, shame on me–of course MAD makes the list!

TN: What was your first professional job as an artist?
GC: My first pro nibble was when I won a contest in Cerebus comics. They hosted an armature style “submit some comic art” contest. I sent a comic in called Closing Time. It showed two people hooking up at a bar. They were both hammered. The final panel showed them waking up the next morning looking like monsters as they pried their eyes open and saw each other in the light of day.

TN: You have done a lot of work for special limited editions of Stephen King’s books, as well as books about the author himself. Have you met him?
GC: I’ve been very lucky to have worked on numerous things for King projects, but I’ve never physically met him. I’ve received some nice emails over the years, but never had the opportunity of meeting up with him. I deal mostly with his PA, who’s a sweetheart and a good pal.

TN: You’ve done some work for writer Bev Vincent as well, what was it like meeting him, and how did you get involved in his ROAD TO THE DARK TOWER book?
GC: I’ve known Bev for ages. Another real sweetheart of a fela. I’m thinking I first met him at NECON, a horror con I try to attend in Rhode Island. Bev is the “go to” guy for any and all SK trivia. If ever I need a question answered for something I’m working on, I belt Bev an email and he rockets back an answer in a nanosecond!

TN: A couple more names I’d like to drop on you, Dave Hinchberger, of The Overlook Connection, and Richard Chizmar, of Cemetery Dance Publications, how do you know them?
GC: Dave and I met through a mutual friend, Rick Hautala … I’m thinking … nearly twenty years ago. I do a slew of projects for Dave. We talk on the phone all the time; might as well be an old married couple. As for Richard Chizmar, and Cemetery Dance, they really put me on the map with some incredible projects over the years, and they too are like family. In all, this specially spooky book bizz is a fairly small stable of characters. We all pretty much know each other, and we’re all in it because we love it.

TN: You’ve now published your first themed coloring book, and it’s great fun! How is it you decided upon … Zombies?
GC: Uncle Glenny’s was the joint brainchild of Dave Hinchberger and m’self. Why zombies? Why not–HA!! Zombies are uber hot these days, plus they’re a frigging blast to draw.

TN: There’s quite a variety of zombie drawings in the book … zombies camping, kissing, under water, in a band, even at a strip club, just to name a few. How did you choose which made the book?
GC: In all honesty, I just let things drip out of my head onto the page. I get an idea, think it would make a fun drawing, and go for it. It helps to have a twisted sense of humor in this line of work. Actually a twisted sense of humor helps with most avenues of life these days.

TN: From start to finish, how long did it take you to do each drawing?
GC: The zombie drawings take me on average three to five hours, depending on detail.

TN: I have colored some of mine already and I’ve enjoyed it very much, but I noticed some pictures were meant to “save” than color, is this on purpose for collectors of your work?
GC: I just got carried away with a few detail-wise. I actually had to hold myself back from a lot of detail so there’d be space to color. Detail stuff just comes natural to me.

TN: Where can collectors purchase this book?
GC: THE OVERLOOK CONNECTION … is the spot where you can snap those up!

TN: Your art is truly amazing, would you ever do a comic book now that you have done a coloring book?
GC: Oh sure. I’m doing some stuff for Cemetery Dance’s comic line GRAVE TALES now, and I’ve done a couple comic style entries over the past year. Comics were how I got my start.

TN: Will you be doing any other adult coloring books in the near future, say, a Stephen King coloring book?
GC: I’d LOVE to do another coloring book–stay tuned!

TN: Final question: What’s next for Glenn Chadbourne?
GC: As for what’s next, I’m involved with Brian Freeman doing a series of really cool spooky children’s books. The first “The Zombie Who Cried Human”, will be out in the spring, and we have two more volumes slated. I’m also working on a series of books for Ramsey Campbell, for PS Publishing (owned and operated by yet another fine gent Pete Crowther). There are other projects, but I can’t really talk about those til they’re announced.

TN: Thank you so much Glenn for taking time to do this interview with me, it is greatly appreciated, and I’ve enjoyed reading all your answers to my questions. I know others will as well. I am looking forward to what’s coming our way from you in the future.
GC: Soooo, nice talking with you. Peace ‘n love. Glenn