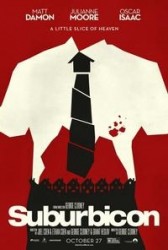 Suburbicon, rated R, is a cross between a crime drama, and a dark comedy. Directed by actor George Clooney, and co-written with the Coen brothers, Joel and Ethan (known for their twisted, dark comedies such as, Fargo), this film carries what I call, a one-two punch. So, with the strange title, what is Suburbicon about?

Suburbicon, as I say, has two storylines going on throughout the film. The first storyline is of an African-American family who move into Suburbicon, a tract housing development, which on the surface appears to be nothing short of ideal. Since this story takes place in 1959, a time when segregated neighborhoods were existent, it is no surprise that some of the neighbors are very unwelcoming to their new African American neighbors. The family experiences hatred, violence, and bullying, and still tries to keep some sense of normalcy through it all. The second storyline is that of the family across the fence of these new neighbors, Gardner Lodge (Matt Damon), and his wife Rose (Julianne Moore, who also plays a double role as Rose’s sister Margaret), and Gardner and Roses son, Nicky. 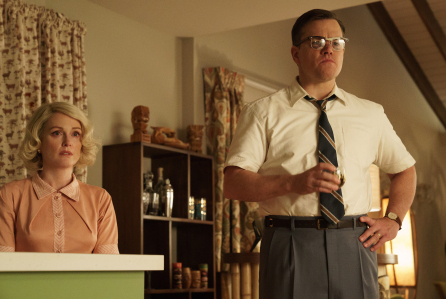 When robbers break into the Lodge home, something horrible happens to one of the family members. A suspicious life insurance agent pays a visit to ask a few questions before issuing the sum of the policy to Gardner. He encounters Margaret, Roses sister (who has now moved in). The plot twists and turns, and everything in this once quite and seemingly safe neighborhood, becomes completely out of control! Gardner has more than just an new ethnic family next door, or nosy insurance agent to contend with, he also has bigger issues to deal with. To see how this twisted tale comes together in the end, I recommend….Suburbicon.

I thought a film with such a great cast, such a big name like George Clooney directing, would be top drawer entertainment. It is good, but I felt it fell just a bit short, perhaps because of the two different storylines. You do need to pay close attention. As I say, it is very dark humored, twisted, and just plain, different. Matt Damon‘s performance was right on the money for a man in such a desperate situation, even comical at times. George Clooney captures the true look and feel of the 1950′s beautifully. So, if off-beat films are your taste, than definitely go and see this film. Who knows, maybe it will become one of those, “campy cult classics”, sometime down the road.