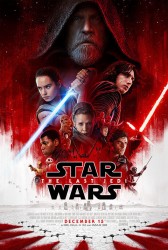 That old familiar theme song queues…and we’re all once again transported to a…GALAXY FAR, FAR, AWAY… It’s hard to believe, but this year marks 40 years since the release of the very first, STAR WARS film, in 1977! I have been a major fan since day one. I saw the first film when I was 6 years old, and have been to every opening weekend, of every STAR WARS film ever since. The franchise has certainly come a long way.

From the old school puppetry, mat painting backgrounds and models, to CGI dominated prequels, the Disney take over, reboot with new sequels, stand-alone films, and the possibility of a new trilogy, once Episode 9 is finished, in 2019. In general, 2017 has been a decent year for movies, with many sequels, some hits, and some misses. However, as in previous years, 2017 has saved the very best for last. STAR WARS: THE LAST JEDI, is newly released in theaters, and it is breaking box office records, like no other STAR WARS film has before! STAR WARS: THE LAST JEDI … takes place exactly where 2015′s STAR WARS: THE FORCE AWAKENS left off. It’s very hard to write about this film and have no spoilers, so I’ll do the best I can. THE LAST JEDI, begins with a space battle between the Rebels (now known as the Resistance), attacking the Empire (now known as the First Order). With hot shot pilot, Poe (Oscar Isaac), leading the battle, the fight for the galaxy, peace, and hope for the future continues.

Even though the battle goes well for the Resistance, the First Order has a tracking device on one of the Resistance ships, which means the Resistance have nowhere to hide, and no escape from the grasp of the evil First Order. Meanwhile, as I said, THE LAST JEDI, picks up exactly where THE FORCE AWAKENS, leaves off. The last time we saw Rey (Daisy Ridley), she was handing Luke Skywalker (Mark Hamill), his old light saber, on the deserted island of Ahch-To, where Luke now spends his life alone, and away from the Resistance, galaxy, battles, and the Jedi ways. Rey wants Luke to teach her the ways of the Force, and also wants him to come and help fight the First Order, however, Luke is very disturbed by the amazing strength and power Rey already possesses. This causes a major change in Reys plans. Meantime, the evil Kylo Ren (Adam Driver), not only wants to destroy the Resistance, but now has a mysterious connection with Rey, and this will either bring her to the darkside, or perhaps, Rey’s future will take a different path? With plenty of action, adventure, some sub-plots, and a wide array of emotions throughout the film, I highly recommend…STAR WARS: THE LAST JEDI.

When STAR WARS: THE FORCE AWAKENS was released in 2015, the world was more than excited. It would be the first time the original actors, from the first original trilogy, would be on screen together since 1983. I personally refer to THE FORCE AWAKENS, as the “reunion sequel”. However, THE LAST JEDI, is a straight-up, solid SEQUEL! This story is what we wanted, and more! It is deep, it answers questions, yet leaves us with new questions. There are tons of surprises, cameos (including the return of a major character), but most importantly, THE LAST JEDI, has deep emotion, it touches the heart, throughout the entire film. Die hard fans will notice little details, sound bites, music themes, and cameos. The main thing about this film is, what you think is going to happen, or might happen, well, let’s just say, you won’t see some of these surprises coming! This sequel is very reminisce of THE EMPIRE STRIKES BACK, and in my opinion, it ranks right up there as the second best installment in the franchise.

There is a very emotional side to this film on many levels, and you will know these scenes of course, when you see them. This is also the last Star Wars film actress Carrie Fisher(Princess Leia), appears in, as sadly, she passed away, one year ago this coming week. For fans around the world, it is very hard, and emotional, to see her on the big screen for the last time. There are rumors however, that some unused footage from this film, with the Princess, may make it into Episode 9, coming in 2019, but as I say, this is just rumor at the moment. STAR WARS: THE LAST JEDI… is full of excitement, laughs, magic, and even sadness. It leaves us with questions of where the franchise will take us in the upcoming film, but don’t worry, there is a Han Solo, stand-alone film coming in the summer of… 2018! Until then, RUN (don’t walk), to a theater near you, and see STAR WARS: THE LAST JEDI… and relive that old Star Wars magic again, and of course… MAY THE FORCE BE WITH YOU!