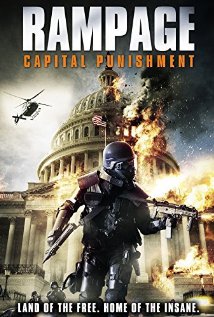 The clip slides into the base of the gun, you then bull back on the lever and now it’s ready to shoot. This is how you should prepare yourself when you sit down to watch Rampage: Capital Punishment. The movie is an emotional assault weapon. And to write this review, I honestly had to rip myself open to write this review Rampage: Capital Punishment has me a bit choked up, it cuts close the bone.

I watched it 3 days ago and I am still trying to process the film. I think when writing about a film it should be done in a raw state of impressionistic feelings and thoughts before watching it again. I think it is unfair to write about a film and seeing it multiple times to reference “what happened“… it is dishonest… and I like to think of myself as a gleaming beacon of honesty in the horse shit world of film criticism… Seriously, if you don’t own at least 1 pair of rubber boots and you want to be a “film critic” you’re fucked but I digress.

Let me get the meat out of the way, while I stumble to gel thoughts: “Rampage: Capital Punishment” is the sequel to the 2009 film “Rampage.” It’s directed by Uwe Boll and stars Brendan Fletcher who co-wrote the film along with Boll and it is hopefully a part 2 of 3. Cast includes Uwe Boll, Michaela Mann, Mike Dopud and Lochlyn Munro who I remember as Cliff from the low budget comedy Dead Man on Campus.

I have personal attachments to the themes in the film which doesn’t make a film good only makes it relatable, however the film and it’s prequel are a symphony of visceral, so yes, without question they are films that you should see. When I watched the original Rampage I didn’t first think about my personal relationship to the film, I thought about how it ripped me open and how terrible it made me feel. Feel –the most important facet of art, in any form, is to make someone feel. Style, technique, originality are all meaningless if it doesn’t make you feel something. The first personal attachment to the film is when I was about 13 years old I first learned about Anarchy and read The Anarchist Cook Book and thought “fucking cool man.” But as you grow you begin to see that hurting people is “not a good thing.” 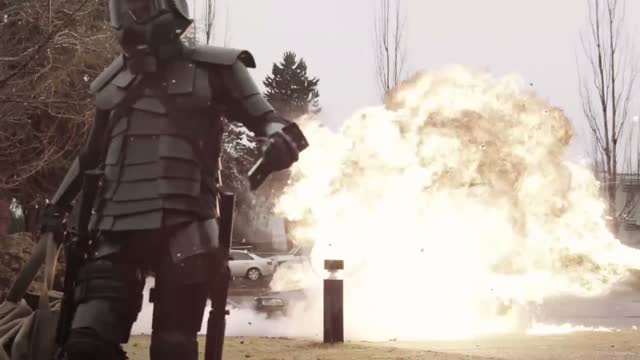 Rampage (as in the first movie) is the story of a 20 something whose parents are pressuring him to go back to school and get his life on track –a conversation I used to have with my parents and the dialogue was almost the same. I do differ from the main character in that he starts killing people by the dozens using automatic weapons while wearing bullet proof body amour.

Even more honesty, I’m not an optimist, I hear there is a new Mad Max movie coming out and I think it’s going to suck. I hear Star Wars episode’s 7, 8 & 9 are being made — even if it’s not by George Lucas, and I think “the films of my childhood are going to be raped some more…” Yes, I was bummed to hear about Rampage 2 in fact my first thought was “shit hope this doesn‘t ruin the first film after I see it.”

I really didn’t think I was going to be writing a review of the film at all –I have a rule about writing about films I hate: I don’t. It works me in a self hating rage and makes my blood pressure climb; I’ve got hypertension 1 –I don’t need to get killed by a bad movie.

So lets talk about a loaded gun, hell lets pick it up and play with it, cause there is no other way to deal with Rampage: Capital Punishment then to treat it like a loaded gun. In the 1980’s idiots in America believed that Ozzy Osborne had satanic messages in his songs and was communicating to cultist through his lyrics, for those of you not familiar this was called “The Satanic Panic.” I almost feel like Uwe Boll is about to ignite “An Anarchist Panic,” well if the Department of Homeland Security had not drained the plausibility of the phrase “domestic terrorist threat.” That phrase I feel most file in the “you so silly Fox News” category.

In Rampage: Capital Punishment our protagonist Bill Williamson reemerges a few years after the events of the first Rampage to take over a television station to get his message to the world: Overthrow the United States Government by force and kill the 1% of elite US wealth.

So how is Bill not just some cookie cutter villain who is just “angry at the world” and fighting Bruce Willis or some other worthless action movie star dink? Because Bill is angry at the world but his reasons are relatable, violence in America, the bank bail outs while the people of the U.S. where/are getting fucked, the fact that whistleblowers Julian Assange and Edward Snowden are prosecuted and not hailed as heroes, that fact the NSA in the United States monitors every single phone call made and every e-mail written, and America transparently becoming an oligarchy of billionaires. Despite Bill’s ruthless violence toward yoga enthusiast (which is kind of understandable, I mean it is yoga) his “good intentions” make him sort of likable. Despite my glib comment about yoga, do not mistake this movie for another Fight Club, Fight Club IS the Disney version of this film. Brendan Fletcher’s performance is so stop on as Bill and he “preaches” it so well, it is hard to look at movie like this and remind yourself “violence is not the answer.”

Which everything all around solid, acting, pace, editing but this paragraph honestly wa s a bit of an after thought, great film makes you forget about those nuts and bolts. I typically don’t think about acting when watching a good film, because the acting should make you forget that they are actors. You have to remember after the movie that you watched fiction, a good film and you don’t want to remember, no matter how painful.

As for genera I don’t know where this movie falls in, I mean it is easy to start off with saying “well, it is not a romantic comedy.” It’s part action movie, part siege film, part high tension political thriller… I get the marketing for the film calls it an action movie but that’s like calling Night of the Living Dead a zombie film. Only difference is with “Rampage: Capital Punishment” you don’t have to dig under the surface. This film is an angry monster can not hide behind any mask… With those familiar with Boll’s films this is nothing new Darfur (a.k.a. “Attack on Darfur”), Auschwitz, Stoic are all brutal films that leave bloody finger prints on your heart like a crime scene where the mad man butcher didn‘t bother to cover anything up … 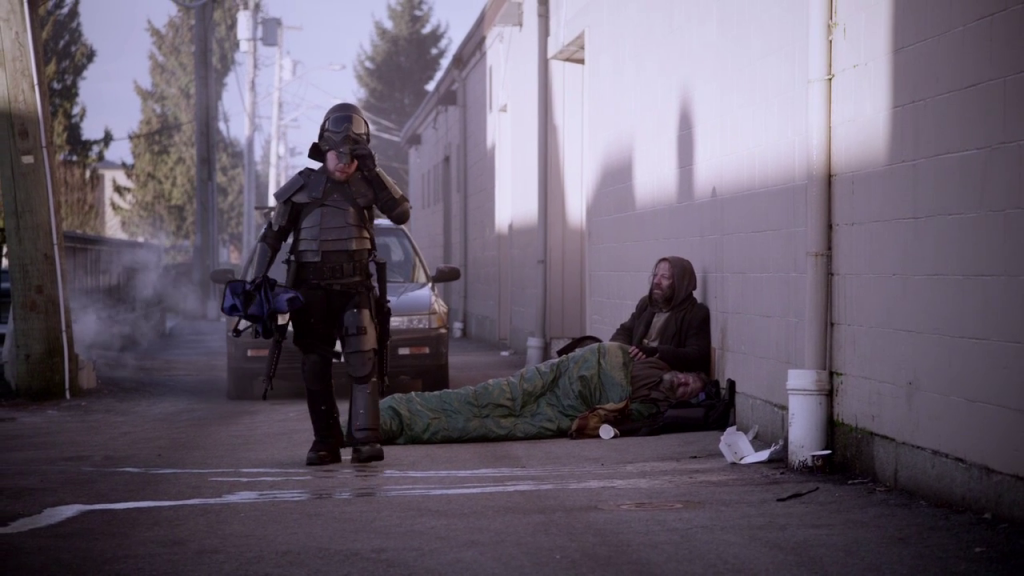 So what is different about Rampage: Capital Punishment is a quixotic winking towards an answer… Our psycho butcher has painted the walls in his victims blood “You want to stop my killing? Why don’t you start killing?” It’s a delicate game of interpretation with that line, because it’s hard to tell: is he serious?

Rampage: Capital Punishment is a loaded gun. Especially for people who know how the world works –a world of lawyers and not so free speech, could our mad man really be saying that? Is this psycho serious? Personally, I think Mr. Boll is a genius, so I think this is part of the game. Great art –Shakespeare for instance is always debated in its meaning and I think Mr. Boll the lunatic and Dr. Boll the professor of literature from the University of Siegen are one in the same.

Remember what I said about a loaded gun? Rampage: Capital Punishment is a glorious and delicate weapon of interpretation, you can look at the main character as Netflix calls him an “anti-hero” but if you listen to what Bill is saying it is a very clear picture of the US government as a pernicious machine and the elite running it are merely looking for war fodder to make them more money. Bill’s logic clicks into place like the cocking of a gun. A guy talking conspiracy on the street is an asshole, cause he’s not doing anything about it. Bill is doing something and he is giving you the answer as to what to do, again, not the rants of a Disney villain sound and clear instructions. A film has now been made into a gun and it is our toy and lets face it, violence sells…

Rampage: Capital Punishment is a powerful film, I don’t want to call it anarchist propaganda because I get the balance and the ugliness of some of the violence is to shame the action of using violence. For me, despite the film labeled as an action film it is a really horror film… Imagine if all the kids in “Occupy” decided that bombs where the way to go… That is a nightmare because when governments are overthrown typically it’s something worse that takes over than what was before. And while the film calls for killing billionaires the fact is they are the government.

Great art has a powerful spirit, this film haunts me as if it were a poltergeist with an agenda. I am also ticked off with the film’s evil doppelganger –Bill’s message of overthrow the government and the release of the film has an odd synchronistic with Doug Lamborn a right wing US Congressman calling for the US Army Generals to abandon their posts in protest of president Obama.

Posted in Action and Giallo/Thriller and Top movie by Josh Darling on October 11th, 2014 at %I:%M %p.