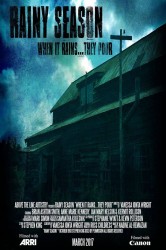 There are so many wonderful, entertaining, and frightening Stephen King short stories. Stories such as, THE MIST, THE BODY, THE LIBRARY POLICEMAN, THE MONKEY, SURVIVOR TYPE, and THE SHAWSHANK REDEMPTION, just to name a few. Personally, I feel RAINY SEASON, is one of the top scary short stories King has ever written. When I heard I was getting the opportunity to see the adaptation of it, my expectations were very high , and I was NOT disappointed!

RAINY SEASON… was originally published in Midnight Graffiti magazine, in the 1989 Spring issue. It was later published in the Stephen King short story collection… NIGHTMARES & DREAMSCAPES… in 1993. The story is about a young couple who rent a vacant home in Maine, during the beginning of the summer season. Every 7 years, on June 17, a sacrifice must be made, so the locals can be spared to live yet another 7 years in peace. The couple were warned, they had their chances to leave, but they don’t listen. What comes later that night on the 17th, is horror of the most unspeakable kind, a storm, not of rain, but FROGS!

Like I said, my expectations of this short story being adapted to film were very high, and as I said, Vanessa’s vision certainly did not disappoint! The lead actors did fine performances, the locations made you feel like you were really there in Maine during the balmy summer season, and this was one of the closest adaptations to a King story I’ve ever seen! So, what makes Vanessa’s direction different than the rest? 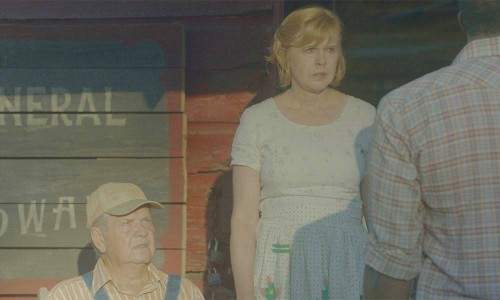 Well, remember the classic horror film, JAWS? You didn’t actually see the shark for quite some time, in fact not until later in the film, right? However, the anticipation of what was to come was actually intensified by the music, sound effects, suspense, and most importantly, your…imagination. That’s exactly what Vanessa did, she built up the fright and horror of this story by using what I will call,”old school horror storytelling”, and I loved it! You don’t exactly SEE the frogs, but you hear them, giving you that creep factor of almost being able to feel them. This in itself, is worse than actually seeing them! In many cases, the anticipation of what comes next, is actually much more magnified and intense by leaving it to the imagination. Vanessa knew that, and this is why… RAINY SEASON, is what I consider to be one of the top best Dollar Baby films I’ve ever seen, and perhaps, one of the best film adaptations of any of his work!

It is based on a short story, yes, but it is not hyped up with what I call, fillers, meaning constant additions to the story to lengthen it. Rather, the story is in its most pure form, and it is executed perfectly. Short and sweet, no compromising the original story!