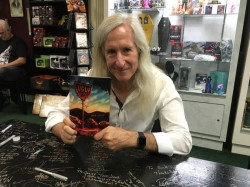 Mick Garris has worn many hats in the film industry. To his credit this includes producer, director, actor, interviewer, and… writer. He has made his passion for film, his life’s work, for over four decades now, and is showing no signs of hanging his hat up any time soon.

Born December 4th, 1951, in Santa Monica, Mick is a native of southern California, growing up in the heart of the San Fernando Valley, where the sun shines abundantly, and the film industry was practically at his back door. Since the age of twelve, he carried an 8mm camera everywhere, and his love for film was born. Mick worked several jobs in the film industry, including the 1980′s television show, AMAZING STORIES, along with director Steven Spielberg, before directing his own film, the horror sequel, CRITTERS 2.

Although Mick has done many films, from several genres, it’s horror he always seems to gravitate back to, bringing some of the best to both big, and small screen. This includes several adaptations from famed horror writer, Stephen King. SLEEPWALKERS, THE STAND, THE SHINING, DESPERATION, and BAG OF BONES, have all been brought to life, from the written page, to film, through the unique vision of both, Mick Garris, and Stephen King himself. These days, Mick has been behind the camera for the small screen more often, bringing his unique style of directing to television programs such as, PRETTY LITTLE LIARS, WITCHES OF EAST END, and DEAD OF SUMMER.

However, between filming, Mick has managed to bring us yet another perspective to his already multifaceted talents… writing. Since his first published book, A LIFE IN CINEMA, he has gone on to write several others, DEVELOPMENT HELL, SNOW SHADOWS, TYLER’S 3RD ACT, AND SALOME, being his last released publication in February 2015. 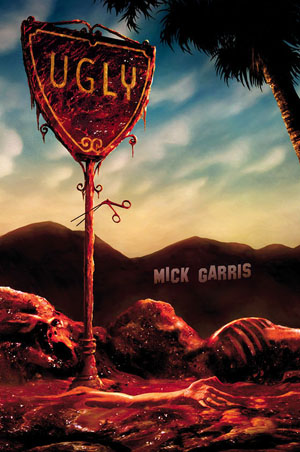 1. You have been doing a variety of projects since your last book. such as, directing television shows, conventions, and other projects. What inspired you to get back into writing?
I’ve never stopped, since I was 12 years old. There might be gaps in the output, but I’m always doing it. The fiction work continues just to have a creative outlet entirely my own, something that doesn’t rely on budgets and available actors and test screenings and ratings and schedules and constant compromise. As much as I love filmmaking, it can be draining to shoot 15-hour days, often all night long, with lots and lots of demands. Fiction is a very singular affair, and it’s actually kind of a vacation for me.

2. Your last book, SALOME. and your new book UGLY. both have something in common: The San Fernando Valley, and the film industry. How much fun is it for you to write about your home turf. and the industry which you are a part of?
Well, they say “write what you know”. For me, it’s write what you can imagine, and set it in a world you know. I don’t have much direct knowledge of plastic surgery (and actually, UGLY is set in Beverly Hills and Malibu, neither of which is in the Valley), but of course, the devil is in the details, and the details are the things to use from real–and reel–life. It’s fun to just assume everybody knows the world you set your story in, even knowing that most don’t. It just feels lived-in that way.

3. Tell our readers just who “Terry” and “Brittany” are?
Figments of my imagination. Neither one is based in any way on anyone I know.

4. Would you say this story is a “revenge” story in some ways?
Well, it is two stories of revenge: one from Brittany for a lifetime of being treated as an inferior, for being judged on her appearance and all, and the other by Dr. Terry, for rebuking his arrogance and entitlement. So yeah, revenge seems to motivate everything that takes place in this book.

5. How much research did you have to do in the cosmetic surgery field, and did anyone in specific help you with that for the book?
Well, I’ve known several people who have been under the knife, which leads to a bit of awareness of some of its aspects. But my primary source of inside information was Dr. Google.

6. What do you enjoy more: writing or directing, and which is more challenging?
I love both, but both are very different disciplines. Writing is completely solitary; you are alone in your world. Directing is much more social, and far more challenging. The hours are endless, you are making a dozen decisions a minute, and there is tremendous pressure on making your days and coming in on schedule and budget. But it’s also highly creative and fulfilling. I enjoy both equally, in entirely different ways. But writing is much, much easier for me.

7. Will there be a film adaptation of UGLY, or your last novel SALOME?
No plans at this point–after all, the point of doing the fiction is to not take any of the demands of filmmaking into the writing–but that said, I’ve just been thinking about doing something with UGLY, perhaps if NIGHTMARE CINEMA gets going and we do a few of them.

8 . What advice do you have for up-and-coming writer’s?
To write. To know grammar and spelling. To go places that feel unique to you, to get personal, to be fearless. But mostly, just write.

9. Who designed the cover of the book?
The painting was done by the very talented Tikulin Tomislav.

10. Final question, What’s next for Mick Garris?
If all goes as planned, a small-scale horror anthology movie called NIGHTMARE CINEMA; I will be one of five directors doing five stories: Joe Dante, Ryuhei Kitamura, David Slade, and Alejandro Brugués are the others. The scripts are by Sade and Lawrence Connolly, Sandra Becerril, RC Matheson, and myself. I’m working on another novel, and I’ve been doing the occasional television episodes, most recently two for DEAD OF SUMMER. After that, who knows? You can plan something for years and it falls apart, then you get a call asking if you can be in Toronto next week because a director fell out. In September I’ll be going to the MotelX Film Festival in Lisbon, Portugal, and in October I’m on the jury at Sitges in Spain, as well as Morbido in Mexico.