Language
Through the Black Hole » HELL HATH NO FURY LIKE HER: The Making of CHRISTINE – Lee Gambin

HELL HATH NO FURY LIKE HER: The Making of CHRISTINE – Lee Gambin 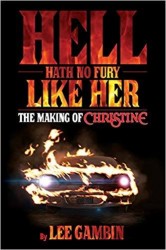 HELL HATH NO FURY LIKE HER: The Making of CHRISTINE, is without a doubt, one of the very best “making of” books I have ever read! I found it unique that instead of numbered chapters, Lee began each new chapter with a quote from different scenes in the film. Definitely interesting and original.

Lee also begins the book literally from the opening credits, which features musician George Thorogood’s song, ‘Bad to the Bone’. Each chapter contains behind the scenes insight, discussions, fun facts, comparisons, and Lee’s opinions of that scene. The detailed and in depth look into each aspect of this film is amazing! At times I felt like I was attending a well executed lecture in a classroom, which was exciting.

There are great interviews with cast members, those who worked on, or help make the film, and of course, the highlight is an interview with iconic director: John Carpenter. The book moves at a good pace, never lagging, and always interesting, truly a read you don’t want to end!

I found this book interesting, entertaining, and a truly fun read. As a huge Stephen King fan, I learned some fun facts about the film CHRISTINE that even I didn’t know! Lee really breaks everything down, and gives the reader a whole new perspective of the film. I really enjoyed all of the behind the scenes, and on-set stories the cast and crew tell. There are great photographs throughout the book, and details about deleted scenes you may not have seen on special edition DVD’s.

I thoroughly enjoyed this book, and feel it is a must-have for not just Stephen King fans, but for anyone who loves to look behind the curtain and see what’s there. Lee Gambin has definitely brought CHRISTINE back to roaring life, and I was more than ready to take the ride!