Language
Through the Black Hole » I AM THE DOORWAY – Joe Kowalski

I AM THE DOORWAY – Joe Kowalski 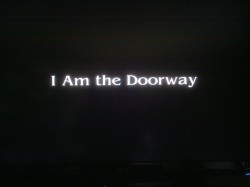 Stephen King‘s short story, I am the doorway, was first published in 1971′s March issue of Cavalier magazine. It was latter published in King’s short story collection, Night Shift. The story is about a disabled astronaut who is exposed to a toxic chemical during their mission to Venus. The lead character has his hand bandaged, it itches him something terrible, and suddenly eyeballs appear on his body as “doorways”.

It’s an alien life form who wants to take over by annihilating all mankind! Joe’s vision of this story is simple, but eerie. The music throughout the film plays a key roll. The actors did a fine job capturing the story line and bringing it to life.

Toward the end of the film, the F/X are very Twilight Zone’ish, which I personally enjoyed and found to be very clever. I felt it leaves the audience with an open ending, however I feel most viewers are looking for a more conventional and definitive ending. I still found the adaptation very entertaining, and done on the budget that was allowed, it was amazing to say the least.